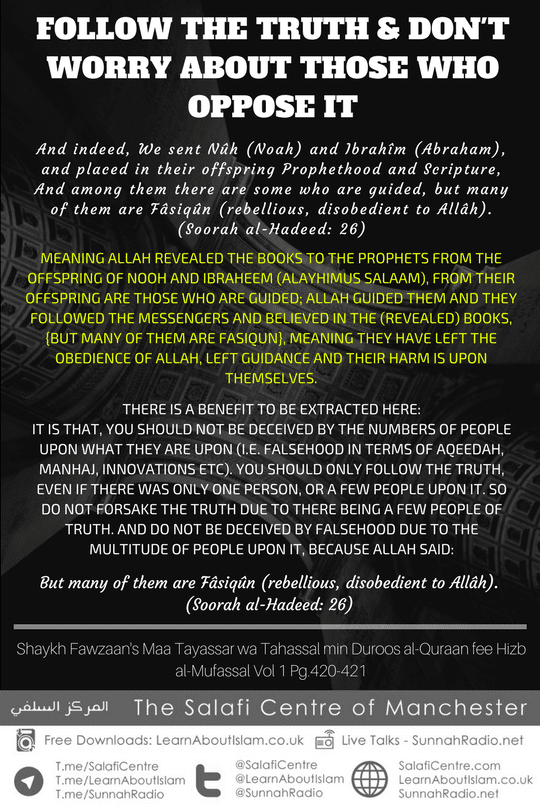 Shaykh Saalih al-Fawzaan in explanation of the following verse:

And indeed, We sent Nûh (Noah) and Ibrahîm (Abraham), and placed in their offspring Prophethood and Scripture, And among them there are some who are guided, but many of them are Fâsiqûn (rebellious, disobedient to Allâh). (Soorah al-Hadeed: 26)

MEANING ALLAH REVEALED THE BOOKS TO THE PROPHETS FROM THE OFFSPRING OF NOOH AND IBRAHEEM (ALAYHIMUS SALAAM), FROM THEIR OFFSPRING ARE THOSE WHO ARE GUIDED; ALLAH GUIDED THEM AND THEY FOLLOWED THE MESSENGERS AND BELIEVED IN THE (REVEALED) BOOKS, {BUT MANY OF THEM ARE FASIQUN}, MEANING THEY HAVE LEFT THE OBEDIENCE OF ALLAH, LEFT GUIDANCE AND THEIR HARM IS UPON THEMSELVES.

THERE IS A BENEFIT TO BE EXTRACTED HERE:
IT IS THAT, YOU SHOULD NOT BE DECEIVED BY THE NUMBERS OF PEOPLE UPON WHAT THEY ARE UPON (I.E. FALSEHOOD IN TERMS OF AQEEDAH, MANHAJ, INNOVATIONS ETC). YOU SHOULD ONLY FOLLOW THE TRUTH, EVEN IF THERE WAS ONLY ONE PERSON, OR A FEW PEOPLE UPON IT. SO DO NOT FORSAKE THE TRUTH DUE TO THERE BEING A FEW PEOPLE OF TRUTH. AND DO NOT BE DECEIVED BY FALSEHOOD DUE TO THE MULTITUDE OF PEOPLE UPON IT, BECAUSE ALLAH SAID:

But many of them are Fâsiqûn (rebellious, disobedient to Allâh). (Soorah al-Hadeed: 26)

Sticking to those who oppose the truth – Shaykh Fawzaan

Shaykh Saalih al-Fawzaan – May Allah preserve him – was asked:

There is found in these times those who fanatically cling to personalities, although the truth opposes them; so how do we advise these youth?

We advise them first and fore-mostly to study , for they did not fanatically cling to anyone except due to ignorance; so upon them is to study beneficial knowledge(*) and to gain understanding of the religion of Allah and the truth will become clear/manifest to them. – if Allah wills -But as long as they are ignoramuses or pseudo seekers of knowledge, this will not increase them in anything except differing. And it will not increase them except (in) disagreement

“Knowledge is what Allah, His messenger, and the companions said.

Shaykh Fawzaan: What is meaning of the statement of Shaykhul Islaam Ibn Taymiyyah (rahimahullah)…. UPDATED

What is meaning of the statement of Shaykhul Islaam Ibn Taymiyyah rahimahullah “Whoever opposes the ijmaa (consensus of the scholars) then indeed he has disbelieved”?

{And whoever contradicts and opposes the Messenger (sallallaahu alaihi wa sallam) after the right path has been shown clearly to him, and follows other than the believer’s way, We shall keep him in the path he has chosen, and burn him in Hell – What an evil destination!}        Surah An-Nisa’ Verse 115

And this is an evidence upon the one who opposes the ijmaa, that indeed he has disbelieved.

Note: Please refer to the following link for further explanatory articles regarding the principles of establishing Kufr(disbelief)  upon a person who may have done an act of Kufr but in one situation he HAS disbelieved and in another scenario he HAS NOT disbelieved.

The Principles of Takfir

Some people are under the illusion that what is intended by this statement, is that it is not permissible to disapprove of (one another) with regards to any affair in which difference of opinion is held. So based upon this (illusion of theirs), it becomes impermissible to disapprove of a Munkar (an evil) unless there is complete agreement in doing so. This is a wrong understanding necessitating the closure of the door of enjoining good and forbidding evil.

The scholars hold differences of opinion in most of the masaa-il; and that which is correct with regards to this statement (Laa Inkaar Fee Masaa-il Al-Khilaaf) is that there should neither be harshness in disapproval nor reprimand with regards to those issues about which there is no manifest proof to be taken as the final (affair). And the basis upon which this is founded is that the issues of khilaaf are of two categories;

The First Category Of Khilaaf:

They are those issues of khilaaf in which there is proof necessitating that it be taken as the final (affair). So here, the proof must be taken and the other statement/opinion in opposition is discarded.

And whoever follows the statement/opinion that is established to be in opposition to the proofs, then he is to be renounced/disapproved of.

The Second Category Of Khilaaf:

It is those issues of khilaaf in which the proof has not been manifested for it to be taken as the final (affair). It is an affair in which the evidences are either at contention or the views are at variance. This is an issue of ijtihaad, and there is neither disapproval nor reprimand against the one in opposition; rather advice is given for acquaintance with the statement/opinion that carries more weight.

This second category of (khilaaf) is what is intended by the statement (Laa Inkaar Fee Masaa-il Al-Khilaaf), which some people have understood in an unrestrictive manner. [1]