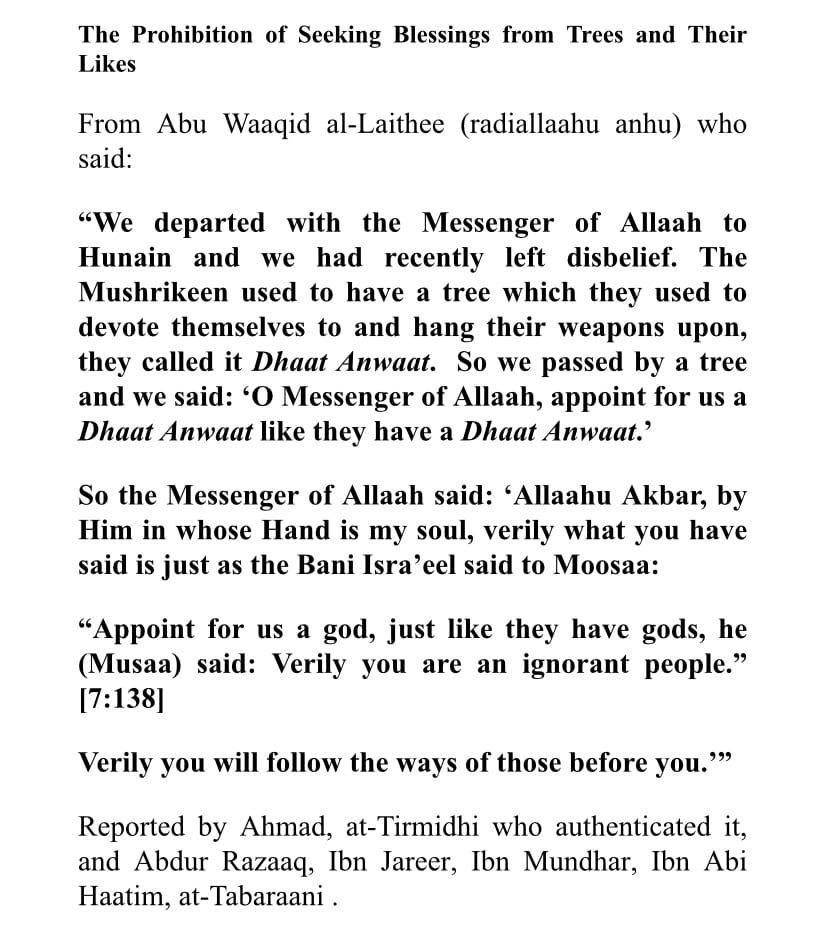 In the Shaykh’s Aqeedah class He said there’s a manhaj benefit we can extract from this hadeeth and it is that Ahlus Sunnah have a Qā’īdah:

Ahlus Sunnah unite upon the truth and do not merely gather numbers.

Tajmee’: is to gather numbers for the purpose of increasing numbers in your party and group.

Ijtimaa’ – is unity upon the truth; adhering and clinging to the truth.

This is a refutation against the likes of Ikhwan al-Muslimeen – those who have their “golden” principle or as Shaykh Uthaymeen (rahimahullah) called it, “Wooden principle”, saying “We unite upon that which we agree upon and excuse one another for what we disagree about”, gathering numbers is the goal for them.

How is this extracted from the hadeeth?

However, despite the need for numbers; the Prophet (sallallaahu alaihi wa salam) focused and gave concern to unity upon the truth and that which is pleasing to Allah.

We can see that Ahlul Bid’ah and people of desires clearly oppose this principle.

We ask Allah to reward the Shaykh for bringing this benefit and explaining to us.

They intend by this, that the person of Sunnah lowers his guard against innovation, making them susceptible to absorbing doubts and innovation and corrupting his religion. Below are a few statements from the scholars addressing this doubt.

“Indeed, criticism from the scholars and disparagement of him whose disparagement is obligatory is from the angle of sincere advice to the Ummah, and warning from his innovation or his deviation is a designated matter, just as the scholars of Islaam have done previously and continue to do so…”

Shaykh Ibn Uthaymeen (rahimahullaah) was asked regarding the errors of Ahl al-Bid’ah, “We correct but do not disparage”, so he replied,

“This is an error, rather we disparage the one who is stubborn against the truth.” And he said, “When the opposition is in the issues of belief, then it is obligatory for it to be corrected, and whatever is in opposition to the way of the Salaf, then it is obligatory to show rejection against it and to warn against the one who traverses upon that which opposes the way of the Salaf in this field.”

Shaykh al-Fawzan (hafidhahullaah) was asked about the principle, “We correct but do not disparage”, he responded,

And he was asked about the principle, “It is permissible to declare as erroneous but is unlawful to revile.”

“This is just like (the principle) “we correct but do not disparage, it is the very same!”

Shaykh Zayd al-Madkhalee (hafidhahullaah) was asked about the principle, “We correct but do not disparage”, he responded,

“This principle is not from the principles of the Rabbaani Scholars, those whose knowledge is relied upon. Rather, the principles of the Scholars knowledgeable of the purified legislation of Allah, both previously and in what continues is correction of that which is deserving of correction and appraisal of the one who is deserving of appraisal and disparagement of the one is deserving of disparagement in lit of the principles connected to this serious topic. This is what Ahl as-Sunnah wal-Jamaa’ah, the Righteous Salaf and their followers traverse upon until the Day of Judgement, and the books of al-Jarh wat-Ta’deel are not remote for (our) minds. Further, this principle contains deception of those whose knowledge of the legislation and its avenues is scant… And this is an error and the person in question is either ignorant, so it is obligatory to seek knowledge truthfully or he is a deceiver and one who is misguided the people, so Allaah is sufficient (over him) and we ask Allaah to guide him and return him to the truth with a beautiful return, aameen.”