What if he finds out that he did not pray towards the Qibla?

What is the ruling, if after the prayer it becomes clear that it was prayed towards other than the direction of the Qiblah; does it make any difference if this (happened) in a Muslim land or a kaafir land or in the wilderness?

If a Muslim is on a journey or in a land in which it is not easy to find someone to show him the Qiblah, then his prayer is correct even after it becomes clear to him that he did not pray towards the Qibla. But if he was in a Muslim land, his prayer is not correct, because he is able to ask someone to show him the direction of the Qibla, just as he is able to know the direction of the Qibla via the mosques. [Fataawaa Muhimma Tata-allaqu Bis-Salaah: Imaam Abdul Azeez Bin Baaz (rahimahullaah): page:5] 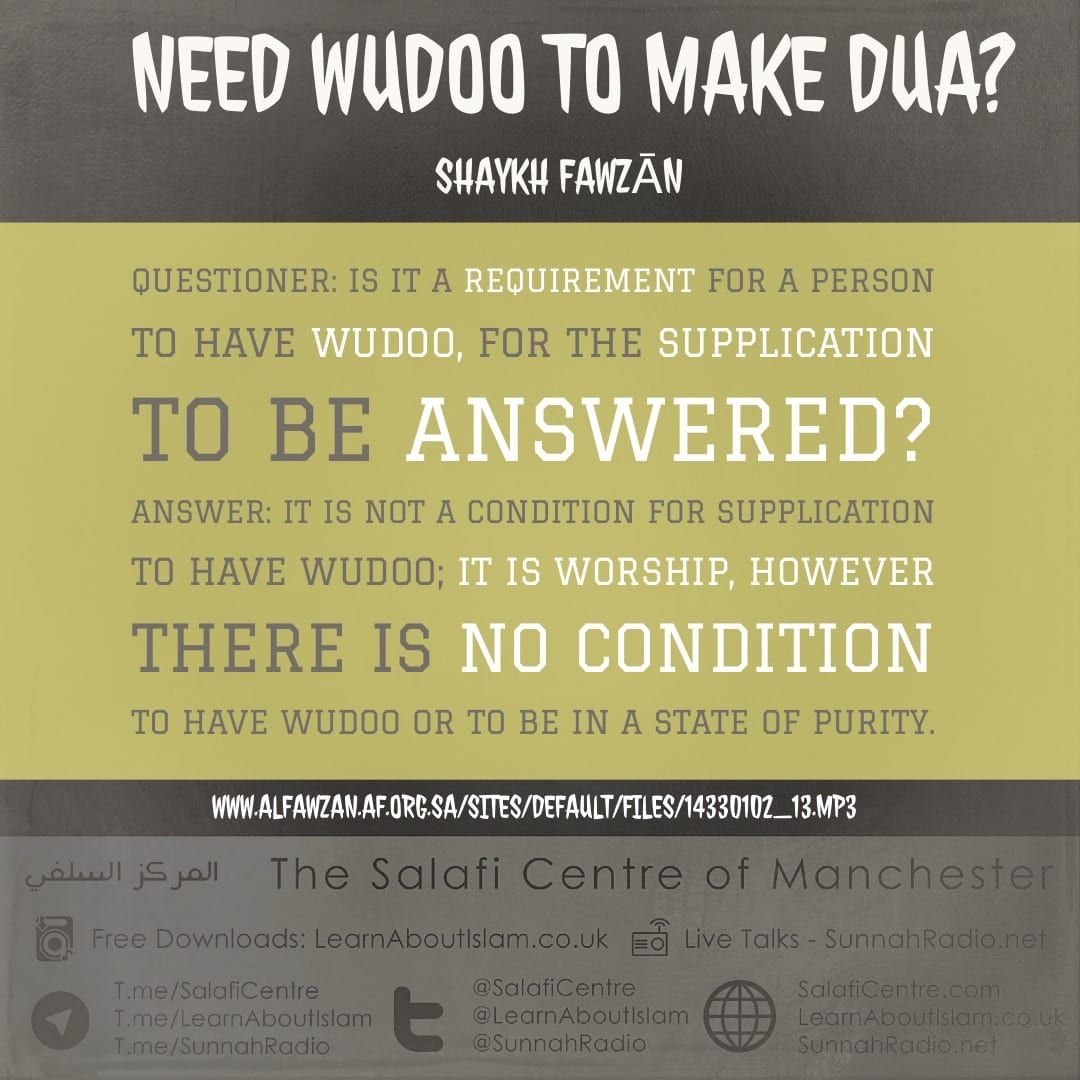 Is it a must to have wudoo when making dua? Shaykh Fawzaan

Is it a requirement for a person to have wudoo, for the supplication to be answered?

Do i need to pray two rakaat if I left the masjid and returned a while after? Shaykh Fawzaan

If I exited from the masjid for a period of ten minutes then I returned is the greeting of the masjid (2 rakaat) binding upon me?

Shaykh Fawzaan: What is the meaning of the statement of Imaam Malik rahimahullah?

Is the statement of Imam Maalik rahimahullah: “Everyone’s statement can be taken or rejected except for the companion of this grave” Is this in the matters of Islamic Jurisprudence only and not in matters of Creed ?

There is no (legitimate) differing in the matters of Creed (Aqeedah). There is no scope in (choosing to) take or reject (Issues of Aqeedah) because they are affairs founded upon the texts (of the Book and Sunnah) rather this (statement) is only (applicable) in the issues of jurisprudence. The speech of everyone in agreement with the evidences is taken and that which opposes the evidences is rejected. This is what Imaam Maalik (rahimahullah) intended.

May Allah reward Abu Muaawiyah Abdullah for his assistance. 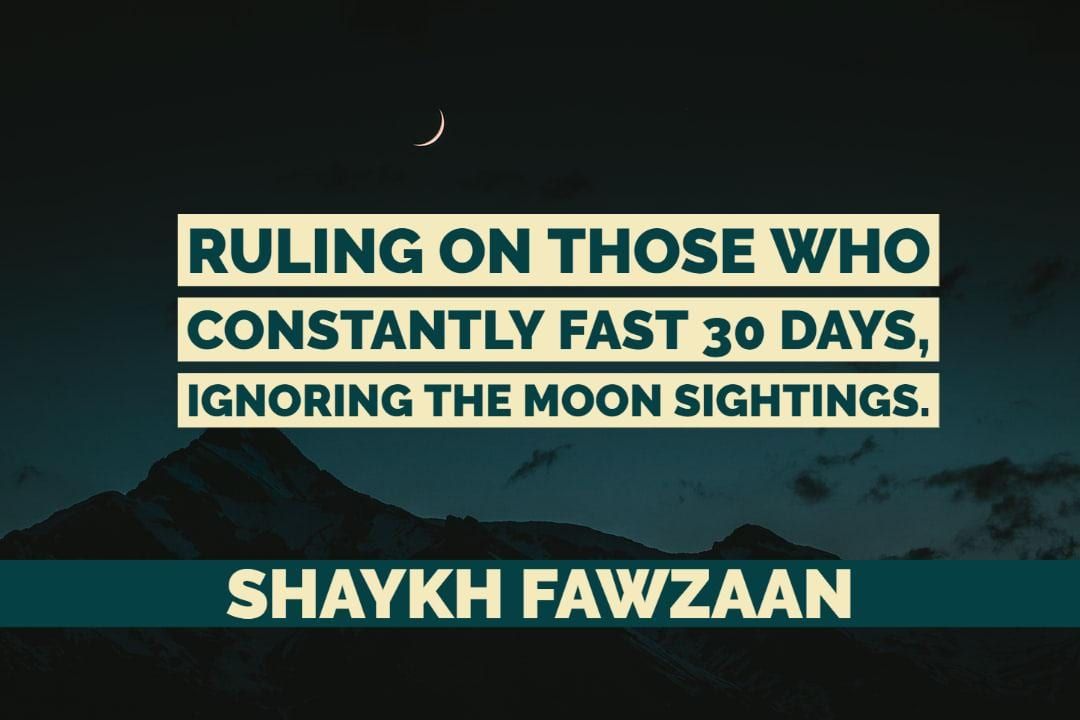 Shaykh Fawzaan (may Allah preserve him) was asked:

What is the ruling on people who constantly fast Ramadhaan 30 days? [i.e regardless of moon sighting]

This is not permissible; fasting is established upon the (sighting of the) new moon:

{They ask you (O Muhammad (sallallaahu alaihi wa sallam) about the new moons. Say: “These are signs to mark fixed periods of time for mankind…”} Surah 2 Verse 189

And the Prophet ﷺ said: 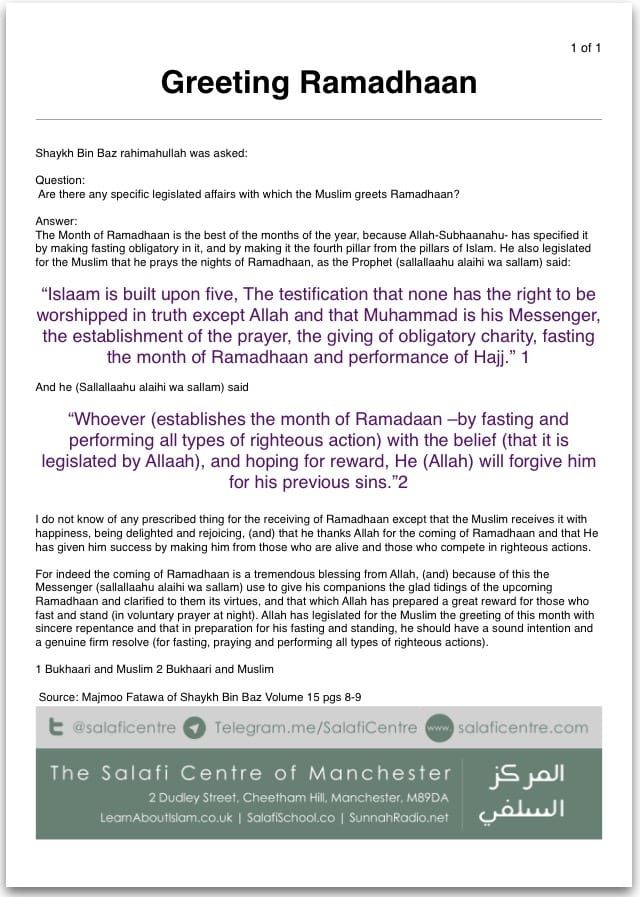 “By Allah, I do not know. No, you should leave this Abdul-Hameed because he is the leader the madhab of al-Mur’jiaa in the Kingdom.”

Shaykh Fawzaan: These are all lies!

Is has been said O’ Shaykh that you have spoken about the matter of Irjaa and we have heard that the Permanent Committee have retrieved their criticism of the book by al-Halabee and ash-Shuk’ree. And it is said that al-Halabee come to visit the Committee and pointed the mistakes in their criticism. So is this true?”

Q: Some people ask about the two books entitled “Al-tahdhir min Fitnat Al-takfir (the Warning Against the trial of Pronouncing Disbelief)” and “Sayhat Nadhir (the Cry of the Warner)” compiled by `Aly Hasan Al-Halaby The two books call to the Madh-hab (school of jurisprudence) of Irja’, which holds that actions are not a fundamental condition upon which the soundness of Iman (Faith) depends, and relate this opinion to Ahl-ul-Sunnah wal-Jama`ah (adherents to the Sunnah and the Muslim mainstream). The author based the two books on distorted transmissions from the Shaykh of Islam Ibn Taymiyyah Al-Hafizh Ibn Kathir, and others (may Allah be merciful with them all). The advisors hope to see clarifications of the material of the books so that readers will be able to differentiate between truth and falsehood.

A: After studying the two books, the Committee found that the book entitled Al-Tahdhir min Fitnat Al-Takfir, compiled by `Aly Hasan Al-Halaby where he added to the sayings of scholars in the introduction and commentaries, includes the following:

1. The author based the book on the invalid and innovated Madh-hab of Al-Murji’ah (a deviant Islamic sect), who limit Kufr (disbelief) to denial, rejection, conscious Istihlal (believing that what is prohibited is to be made lawful) as seen on page 6, commentary 2, and also page 22. This opinion opposes that of Ahl-ul-Sunnah wal-Jama`ah who believe that doctrinal disbelief, actions, statements, and/or doubt entail Kufr.

2. The author distorted facts when transmitting from Ibn Kathir (may Allah be merciful with him) from Al-Bidayah wal Nihayah 13/118, where he stated in his commentary in page 15 – as cited

from Ibn Kathir: “Verily, Genghis Khan claimed that Al-Yasiq was revealed by Allah and that is why they were regarded as Kafirs (disbelievers).” When referring to the stated page, the saying claimed to be Ibn Kathir’s (may Allah be merciful with him) was not found.

4. He fabricated the meaning intended by the knowledgeable Shaykh Muhammad ibn Ibrahim (may Allah be merciful with him) in his treatise “Tahkim Al-Qawanin Al-Wad`iyyah” (Seeking the Rulings of Man-made Laws), as he falsely claimed that the Sheikh considers conscious Istihlal a condition for Kufr, although the statements of the Sheikh plainly indicate that he followed the opinion of Ahl-ul-Sunnah wal-Jama`ah.

5. He commented on the statements of the people of knowledge and implied that these statements mean what they do not mean, as in page 108, commentary 1; page 109,

6. The book also lessens the sin of ruling by other than what Allah has revealed, particularly on page 5, commentary 1, claiming that paying special attention to enforcing Tawhid (belief in the Oneness of Allah) in this area is considered an imitation of the Rafidah (a Shi`ah group denying the caliphates of Abu Bakr Al-Siddiq and `Umar ibn Al-Khattab and making accusations against them and many other Companions of the Prophet), and this is a grave mistake.

7. On examining the second book entitled “Sayhat Nadhir”, the Committee found that it is a supporting tool for the contents of the first book. Accordingly, the Permanent Committee believes that it is not permissible to print, publish, or distribute the two books because of the falsehood and fabrications they contain. We advise the author to fear Allah for himself and for Muslims, especially the youth, and endeavor to acquire knowledge of the Shari`ah (Islamic law) at the hands of scholars trusted for their knowledge and beliefs. Knowledge is a trust which should not be spread unless it is in accordance with the Qur’an and the Sunnah (whatever is reported from the Prophet). The author must renounce these opinions and highly shameful approaches in distorting the statements of the people of knowledge. It is known that returning to the truth is a virtue and a cause of dignity for Muslims.

May Allah grant us success. May peace and blessings be upon our Prophet Muhammad, his family, and Companions.

Praying Behind an Imaam Who has defects (in his recitation)

There is a masjid whose Imaam is a Haafidh of the Qur’aan and he has good understanding in the issues of the prayer, except that there are some defects on his tongue (i.e. in his pronunciation); but he is from a non-Arab country. Is his Imaamship valid alongside the fact that there are those with a clearer tongue than him?

I say: (If) he is not able to pronounce the (letters and sentences) of the clear Arabic language, then he may (read) some of the verses with other than its intended (meaning), such as substituting(ر) with a ( غ ) or a (ح) with a (ه )- saying: (الرهمن), which is similar to what some non-Arabs do; saying: الهمد لله and substituting the (ح) with a (ه); [(saying) الهمد لله رب العالمين instead of الحمد لله رب العالمين] or substituting (ر ) with a ( غ) and what is similar to it; then it is not permissible to pray behind such a person, rather he should learn because the meaning of (what he recites) is the opposite.