Written by Abdullah Jallow on May 14, 2012. Posted in Da'wah - Calling To Islam, Pearls of Wisdom.

”After Prophethood, I do not know of (anything) more virtuous than disseminating knowledge.” [Source: Taareekh Dimashq: 33/455]

The Stance of The salaf towards innovations in religion

What Precedes Before Sin

Written by Abdullah Jallow on April 9, 2012. Posted in Morals and Manners - 'Akhlaaq', Pearls of Wisdom. 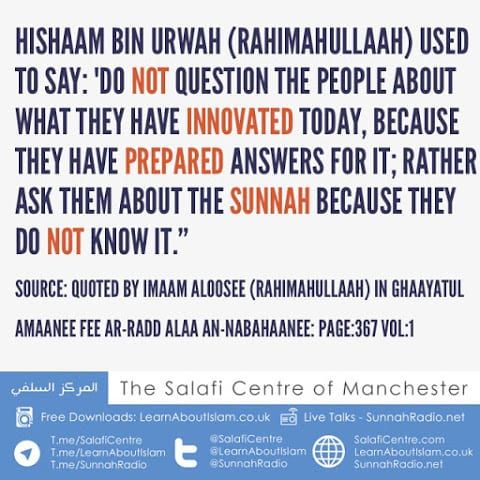 Question Them About The Sunnah

In The Naame of Allaah, The Most Merciful The Bestower of Mercy

”Do not question the people about what they have innovated today,

because they have prepared answers for it;

rather ask them about the Sunnah because they do not know it.” 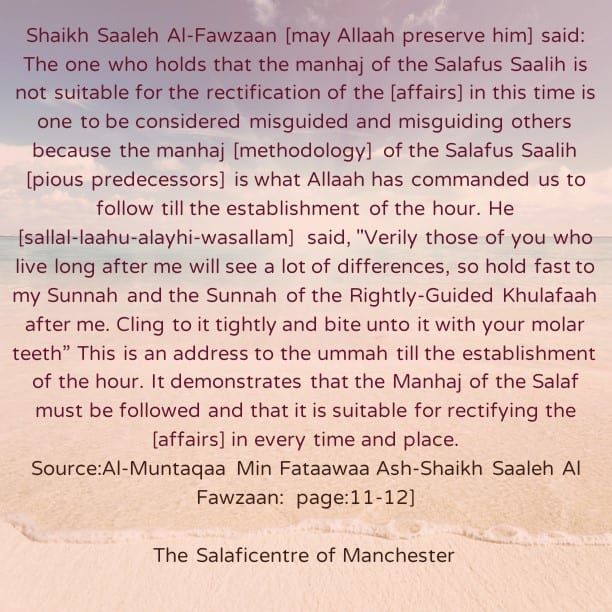 A False And Evil Claim: The Manhaj of The Salaf Is Not Suitable For The Present Era

Question to Shaikh Saaleh Al-Fawzaan [may Allaah preserve him]: ”Some of the people claim that the manhaj of Ahlus Sunnah Wal Jamaa’ah is not suitable for this time, and they sight (as proof for their argument) that the precise regulations of the Sharee’ah held by Ahlus Sunnah cannot be actualized in this present era.

The one who holds that the manhaj of the Salafus Saalih is not suitable for the rectification of the (affairs) in this time is one to be considered misguided and misguiding others because the manhaj of the Salafus Saalih is what Allaah has commanded us to follow till the establishment of the hour. He (sallal-laahu-alayhi-wasallam) said: ”’Verily those of you who live long after me will see a lot of differences, so hold fast to my Sunnah and the Sunnah of the Rightly-Guided Khulafaah after me. Cling to it tightly and bite unto it with your molar teeth”

This is an address to the ummah till the establishment of the hour.  It demonstrates that the Manhaj of the Salaf must be followed and that it is suitable for rectifying the (affairs) in every time and place. Allaah (subhaanah) said:

[وَٱلَّذِينَ ٱتَّبَعُوهُم بِـإِحۡسَـٰنٍ۬ -And also those who followed them exactly (in faith)]: this includes the entire ummah till the establishment of the hour. Therefore, it is obligatory upon the ummah to follow the manhaj of the Muhaajiroon and the Ansaar.   Imaam Maalik (rahimahullaah) said: ‘The later part of this ummah will not be rectified except by that which rectified its earlier part.’

The True Faqeeh [A person bestowed with understanding in the religion]

Written by Abdullah Jallow on October 25, 2011. Posted in Morals and Manners - 'Akhlaaq', Pearls of Wisdom.

Indeed, the Salaf did not designate the name faqeeh, except to the one whose knowledge was accompanied by action, as when Sad bin Ibraaheem was asked, ”who amongst the people of madina was most superior in understanding”, he said, ”the one with more taqwah.”   Farqad As Subkhee asked Hassan al Basree about some affair, so he answered him. Then he (farqad) said, ”Indeed, the fuqahaa are in opposition to you”. So Al Hassan said, ”may your mother be bereaved of you O Farqad, and have you seen a faqeeh with your eyes? Rather a faqeeh is one who abstains from the dunyah and has a fervent desire for the Afterlife.  He is one who has insight in his religion and is constant in the worship of his Lord. He neither speaks ill of the one above him nor does he mock at the one below him, and he does not look for a gain from knowledge Allaah has bestowed upon him”.  Some of the Salaf said: Indeed the faqeeh is the one who neither makes the people despair of Allaah’s mercy nor does he make them feel secure of Allaah’s plan, nor does he call to the Qur’aan and desires what is in opposition to it.