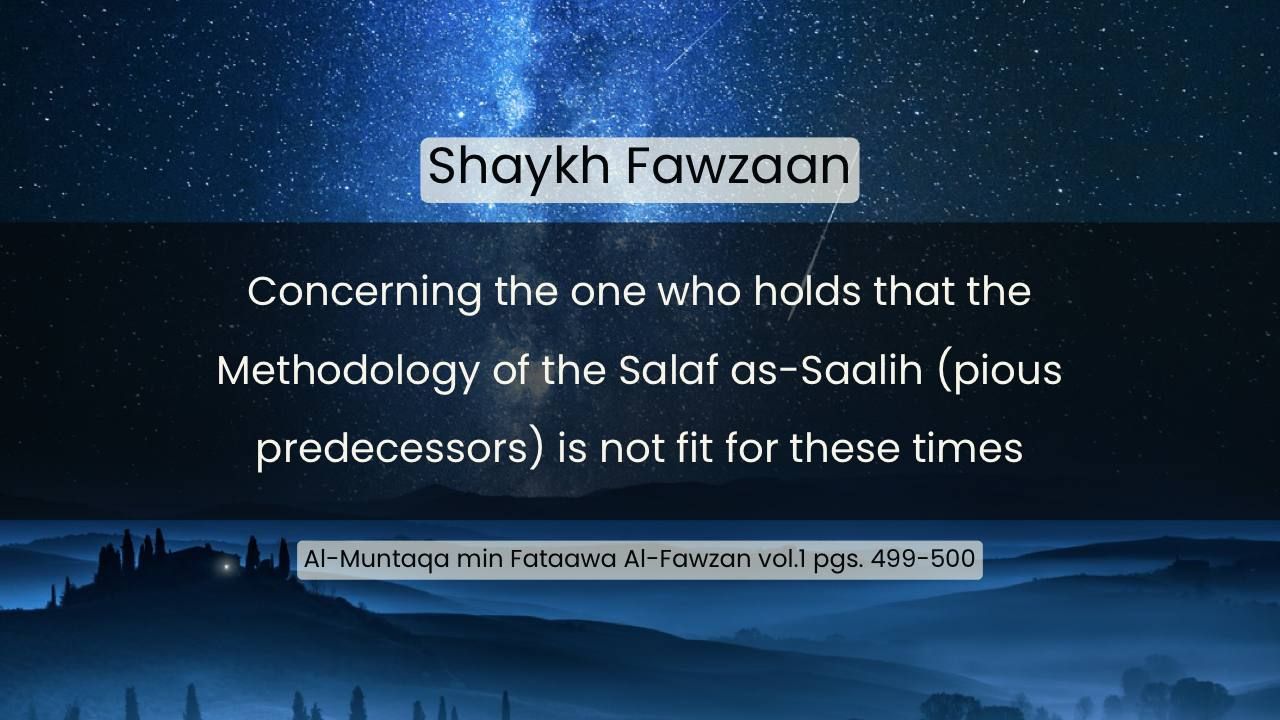 What do we say to some who people claim that the Methodology of Ahlus Sunnah wal Jamaa’ah is not suitable in these times?

The prophet (Peace & Blessings of Allah upon him) said,

Indeed whosoever from among you lives (a long time) will see much differing, so (when you see this) it is upon to you adhere to my Sunnah and the Sunnah of the rightly guided caliphs after me, hold on to it and bite onto it with your molar teeth. (1)

This was an address to this nation (and it remains valid) until the establishment of the Hour. This demonstrates to us that it’s a must to proceed upon the Methodology of the Salaf and that it is suitable for all places and all times.

And the first to embrace Islam of the Muhajiroon (those who migrated from Makkah to Al-Madinah) and the Ansaar (the citizens of Al-Madinah who helped and gave aid to the Muhajiroon) and also those who followed them exactly (in Faith). Allah is pleased with them and they are pleased with Him (At-Tawbah: 100)

and also those who followed them exactly (in Faith).

This comprises the Ummah until the establishment of the Hour, therefore it is obligatory upon the Ummah to follow the Methodology of Muhajiroon and Ansaar.

“Nothing will rectify the latter part of this nation, except that which rectified it’s beginning.”

Whoever wants to separate the Ummah from the Pious Predecessors (in reality) he desires evil for the Muslims. He desires to change Islam, he desires the occurrence of innovations and violations (of the sound religion and methodology), this person should be rejected and his “proofs” should be refuted and his evil warned against.

It is a must to adhere to the methodology of the Salaf, taking them as an example, it’s required to proceed upon their methodology and that (requirement) is present in the Book of Allah and the Sunnah of His Messenger (Allah’s Peace and Blessings upon him) as we have mentioned.

So whoever desires to cut the khalaf (successors) of the Ummah from their Salaf (predecessors) then he is a person causing corruption in the lands, it is an obligation to reject his statement and to refute his speech, and to warn from him.

The ones who this evil statement is known from are the Shia and those who agree with them, those who misguide others, so no attention is paid to them. 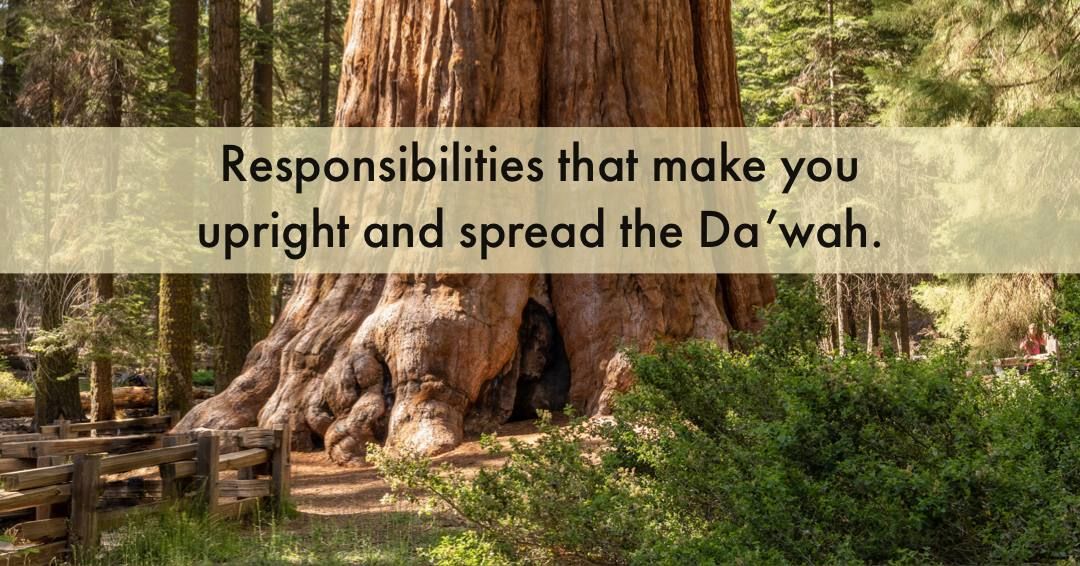 Responsibilities That Make You Upright & Spread the Daw’ah – Shaykh Rabee (Allah preserve him).

The salafi bears a responsibility; upon him is to study (beneficial) knowledge, to study the books of the salaf, the belief of the salaf, their exegesis of the Quran and their explanations of the messenger’s hadeeth (alayhis salaatu was salaam), so that he is grounded in (beneficial) knowledge, whilst he truthfully calls to Allah with knowledge and insight.

He (The Most High) said,

Say, “This is my way; I invite to Allah with insight, I and those who follow me. And exalted is Allah; and I am not of those who associate others with Him.” (12:108)

Meaning, I (sallallaahu alaihi wa sallam) and my true followers, call to Allah with sure sighted insight; ie upon knowledge.

The caller to ignorance (misguidance, evil, innovations), such as the callers of misguidance and innovation – they are ignoramuses, ignorant of the path of truth and the (correct) call to Allah; they call to falsehood.

So learn and study the Book of Allah, and the Sunnah of the Messenger (sallallaahu alaihi wa salam), study the Oneness of Allah (The Blessed & Most High).

May the peace and blessings of Allah be upon our, Prophet Muhammad, his family and his companions. 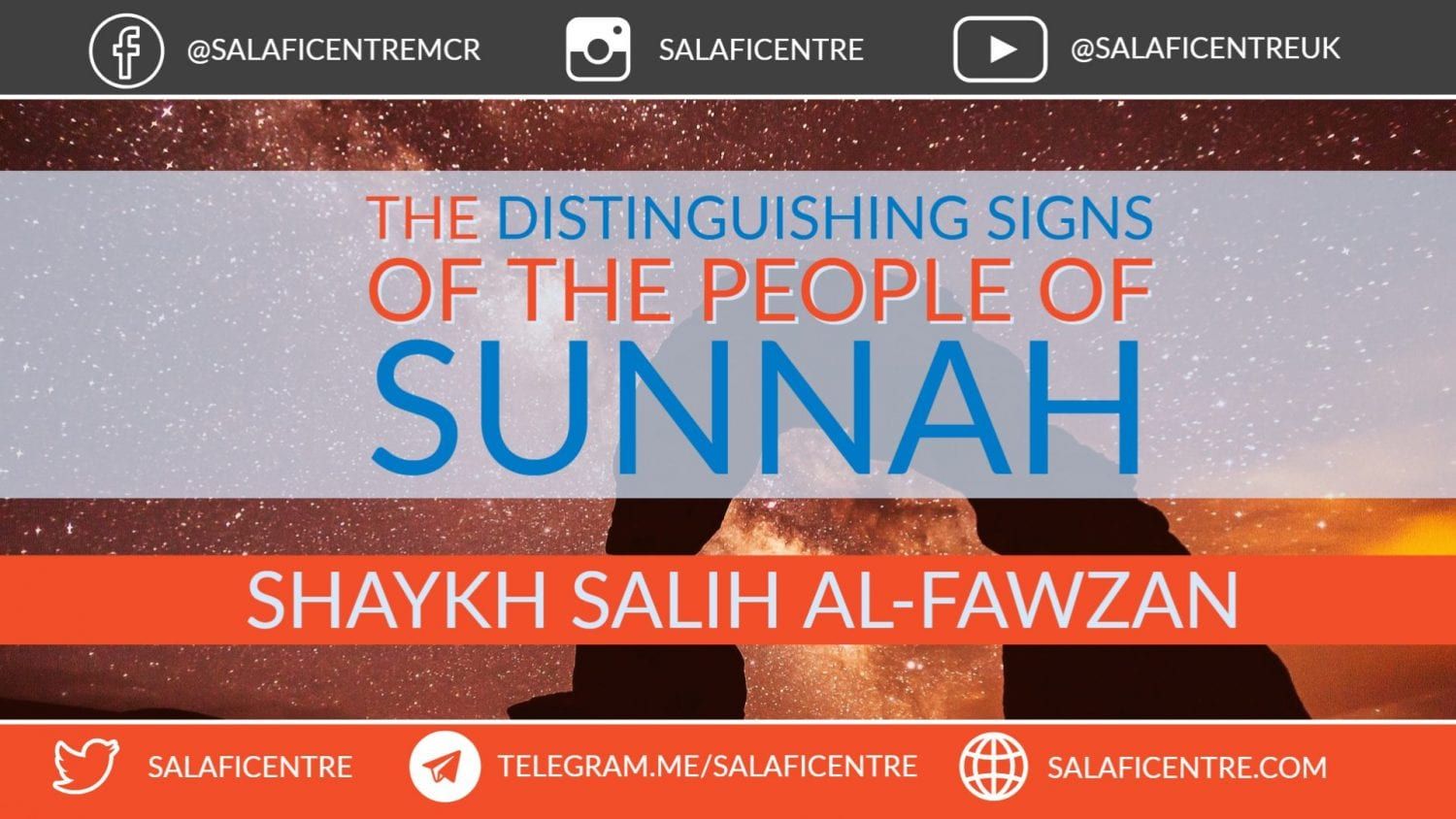 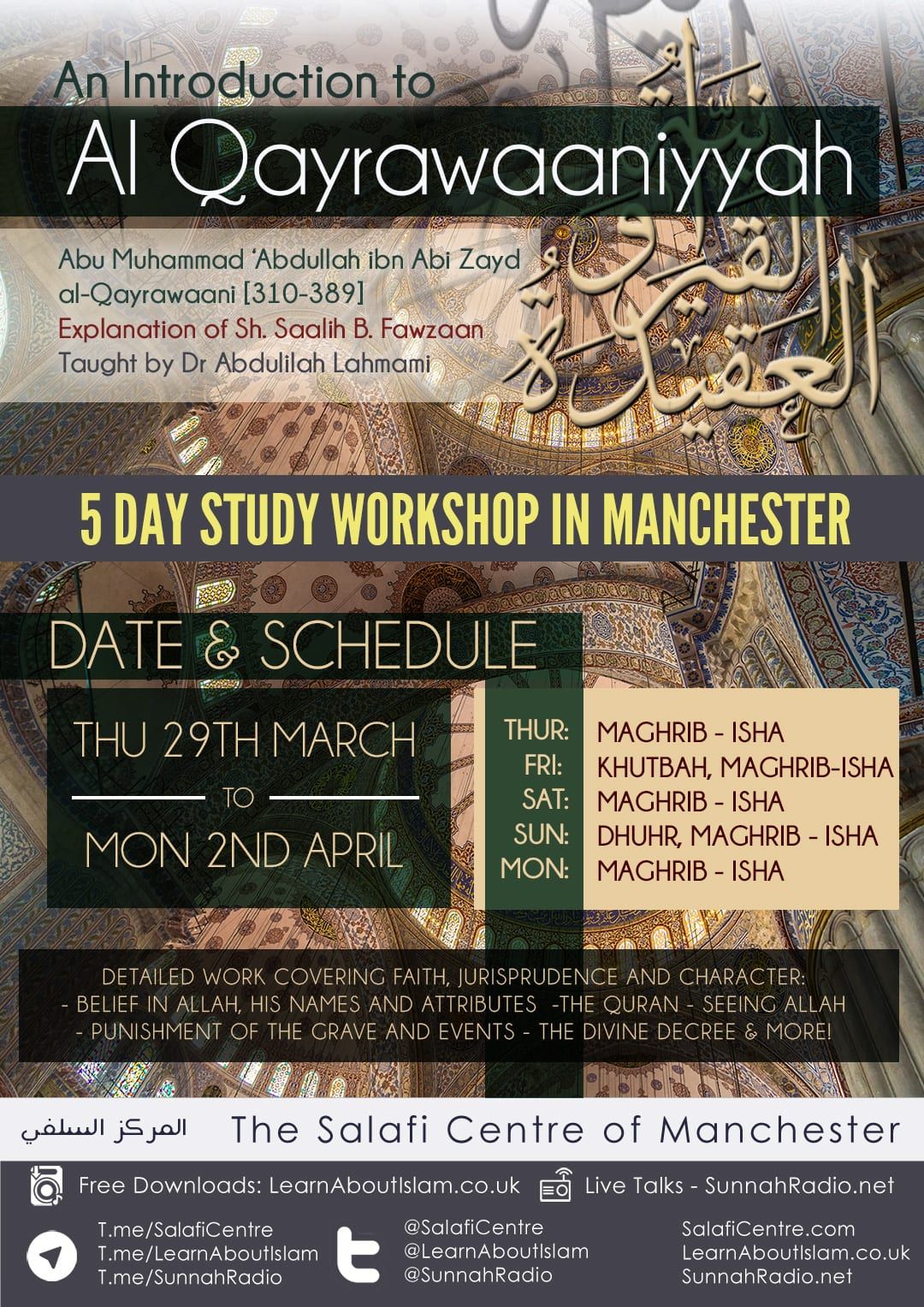 An Introduction to Al Qayrawaaniyya

of Abu Muhammad ‘Abdullah ibn Abi Zayd al-Qayrawaani [310-389]
With the explanation of Sh. Saalih B. Fawzaan

Detailed work covering faith, jurisprudence and character, belief in Allah, His Names and Attributes, the Quran, seeing Allah, punishment of the grave and events, the Divine Decree and more!

Book this date into your diaries over the Holiday Break : Thursday 29th March to Monday 2nd April

Our brother Abdulilah will also be joining on Friday, and giving the Jumua Khutbah. 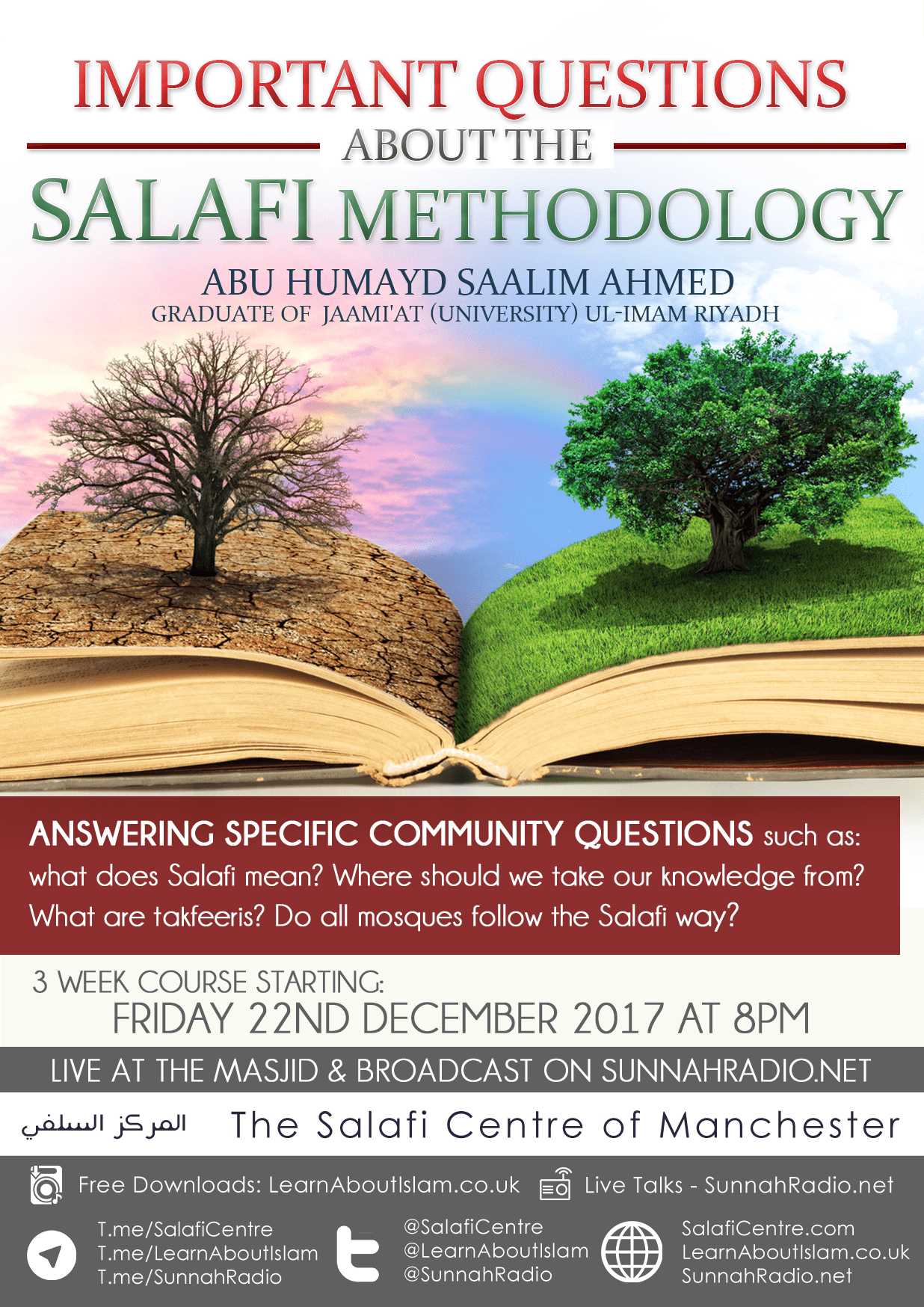 This Friday, 22nd December 8pm will be the beginning of a 3 week series revolving around the Salafi Methodology. Ustaadh Abu Humaid will be answering, common and important, questions from our community. By the permission of Allah removing any doubts or misconceptions people may have regarding this blessed dawah. 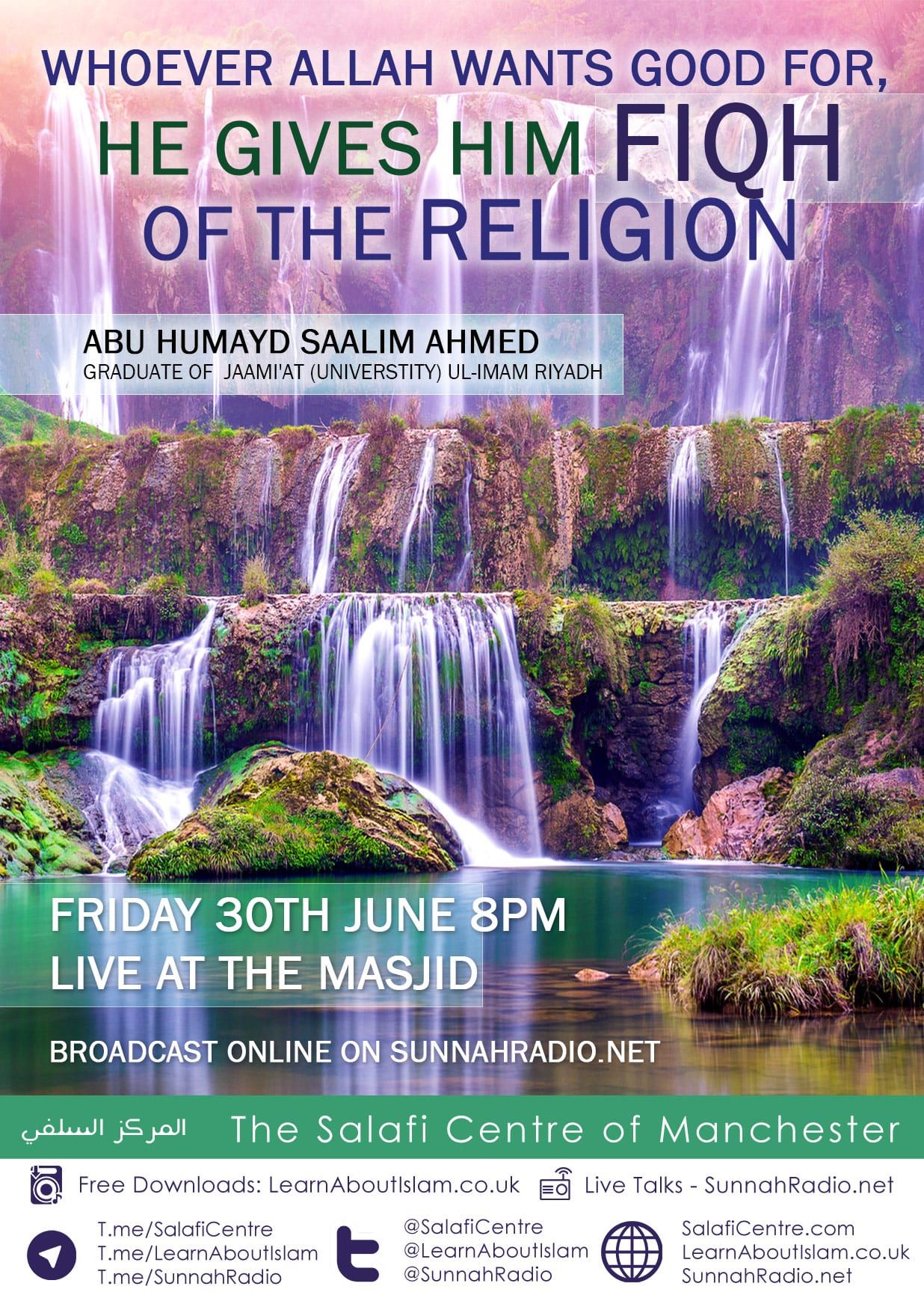 Live Lecture: Whoever Allah Wants Good For He Gives Him Fiqh of The Religion

Lesson Carrying the theme of having the correct understanding of matters, issues in the religion. 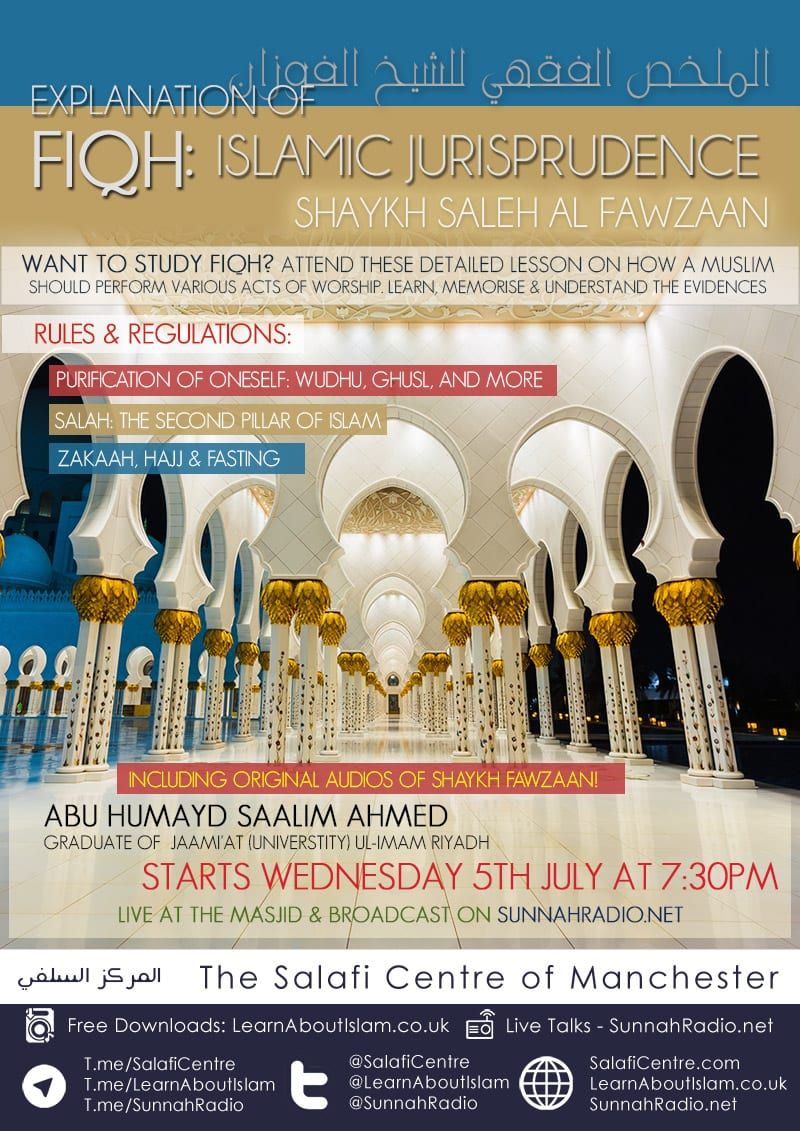 Want to study Fiqh? Annd these Detailed Lessons on how a Muslim should perform the various acts of worship, and the rulings and evidences behind them. 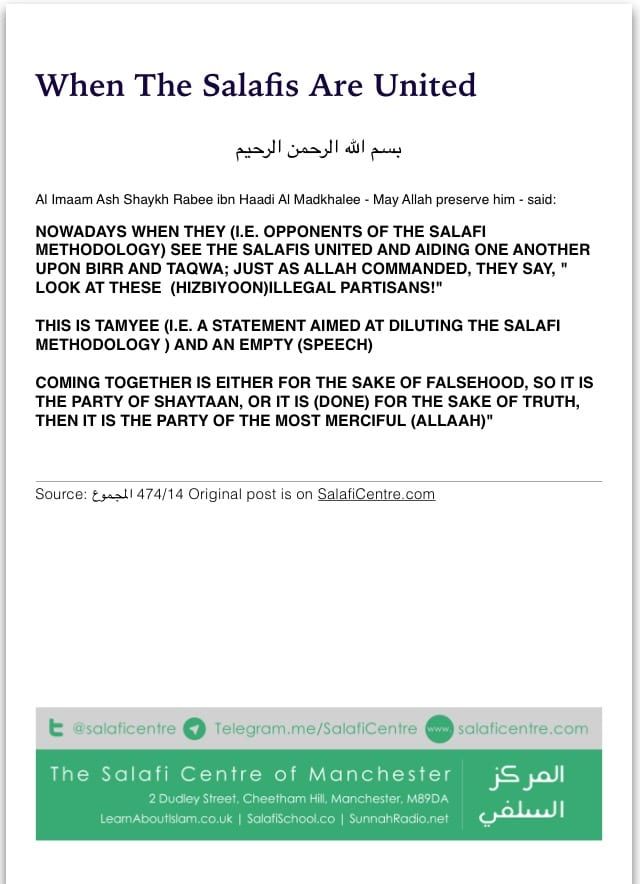 “Nowadays when they (i.e. opponents of the Salafi Methodology) see the Salafis united and aiding one another upon birr and taqwa; just as Allah commanded, they say, ” look at these (hizbiyoon)illegal partisans!”

This is Tamyee (i.e. a statement aimed at diluting the salafi methodology ) and an empty (speech) 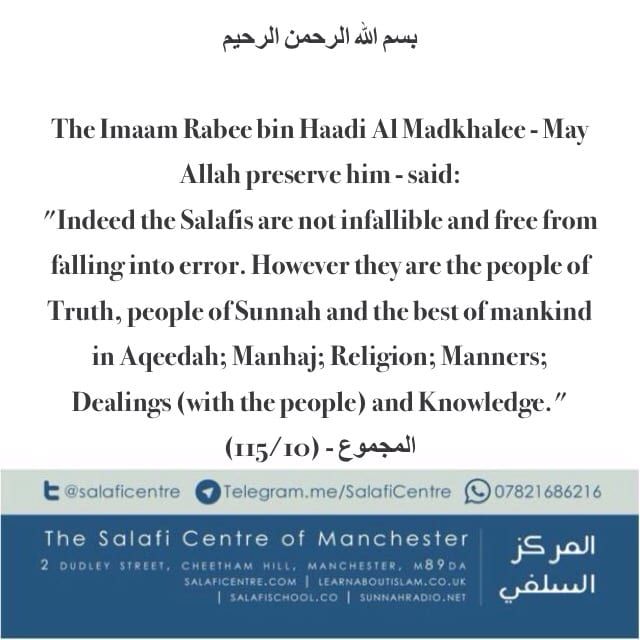 “Indeed the Salafis are not infallible and free from falling into error. However they are the people of Truth, people of Sunnah and the best of mankind in Aqeedah; Manhaj; Religion; Manners; Dealings (with the people) and Knowledge.”

Who are Ahlul Hadith – Shaykh Rabee’ b. Haadi

Excerpts from the full article – taken from Salafipublications.