The enemies of the Salafis and Salafiyyah persist in their disgraceful lies and devil insinuations in the media. They seek to tarnish the true image of salafiyyah by attributing it to the methodologies of the khawaarij, such as Abu Qataadah and his ilk. Indeed, Salafiyyah is absolutely free from the methodology of the innovators. See the following link in order to find out Abu Qataadah’s evil and innovated methodology.

Some Statements of the Salaf about ahlul bidah

Abu Haatim Ar-Raazee (rahimahullaah) said: From the signs of ahlul bidah is that they speak ill of the people of the narrations (i.e. those who hold onto the narrations of the messenger and the companions) [Reported by Imaam Laalikaaee].   Ahmad Ibn Sinaan Al-Qattaan (rahimahullaah) said: There is no mubtadi (i.e. innovator) in the dunyah except that he hates ahlul hadeeth, and when a man innovates the sweetness of hadeeth is removed from his heart [Aqeedatus Salaf 102]    Ayyoub As-Sakhtiyaanee (rahimahullaah) said: I do not know anyone from the people of desires, except that he agues by way of the mutashaabih’’  Al-Ibaanah

[5] The Creed of the Saudi Kings

Written by The Salafi Centre of Manchester on May 30, 2013. Posted in Aqeedah (Creed & Belief), Da'wah - Calling To Islam, Purification of The Soul.

The reaction of King ‘Abdul-‘Azeez as-Su’ood upon being praised in lines of poetry.

Once, during one of King ‘Abdul-‘Azeez as-Su’ood’s (rahimahullaah) trips to the town of al-Kharj (7th of Dhul-Hijjah 1363AH -approx: 23rd November 1944CE) a poet from the people of Najd entered upon him. In his hand was a poem he had written, and so he sought permission from the King to read it out. He began: You are our hope and in you is hope… Upon hearing this King ‘Abdul-‘Azeez called out in rejection and glanced across the gathering to Shaykh Hamad al-Jaasir, saying, “O Ibn Jaasir, take this man and teach him some Tawheed!” [Source: Min Hayaatil-Malik ‘Abdil-‘Azeez, pg.71]

Written by The Salafi Centre of Manchester on April 9, 2013. Posted in Da'wah - Calling To Islam, Scholars of Islam.

He used to be a person with a lot of fiqh and concern for knowledge of the correct positions in the issues (in which) the scholars held a difference of opinion with evidence. He gave great concern to the books of Shaikhul Islaam Ibn Tamiyyah and his student Ibnul Qayyim (rahimahumallaah). He used to give preference to that which was established with evidence. He used to speak very little, except if it was in that which was beneficial. I sat with him on more than one occasion in Makkah and Riyaad–his speech was little except in the affairs of knowledge. He used to be humble and well-mannered, and whoever reads his books will know of his virtue, knowledge and great concern for (seeking) after proofs. So may Allaah shower great mercy upon him.

Written by The Salafi Centre of Manchester on April 8, 2013. Posted in Brotherhood, Da'wah - Calling To Islam, Morals and Manners - 'Akhlaaq', Purification of The Soul, Scholars of Islam.

”We (i.e. some members of Ikhwaan Al-Muslimeen in Saudi) used to know of the Shaikh’s Zuhd and the little attention he gave to the lies of the liars or the slander of the slanderers; so we did not have a way of approaching him, so as to say to him: ”Such and such person says this about you;” because he did not give importance to it.”

[Source: See last two lines in the post on this link: http://www.sahab.net/forums/index.php?showtopic=136672%5D

We ask Allaah to grant us Tawfeeq to follow the footsteps of the Scholars of Ahlus Sunnah Wal-Jamaa-ah, for indeed they are the inheritors of the Prophets.

Kuffaar know the importance of stability, why listen to them when they provoke us against our Muslim Rulers

Shaikh Abdus-Salaam Burgess (rahimahullaah) said: The explanation of this is that the majority of the children of Adam are inclined towards injustice and love of vengeance.  And had it not been that there was a ruler who administers their affairs, they would have become like the beasts of the wild and fish of the sea—the strong eats the weak. [source: Aqeedah Ahlil Islaam Feemaa Yajibu Lil-Imaam: page: 11]

Shaikh Saaleh Al-Fawzaan exposes the falsehood of the Kuffaar

More beneficial articles about the manner in which to deal with our muslim rulers.  Visit www.salafipublications.com 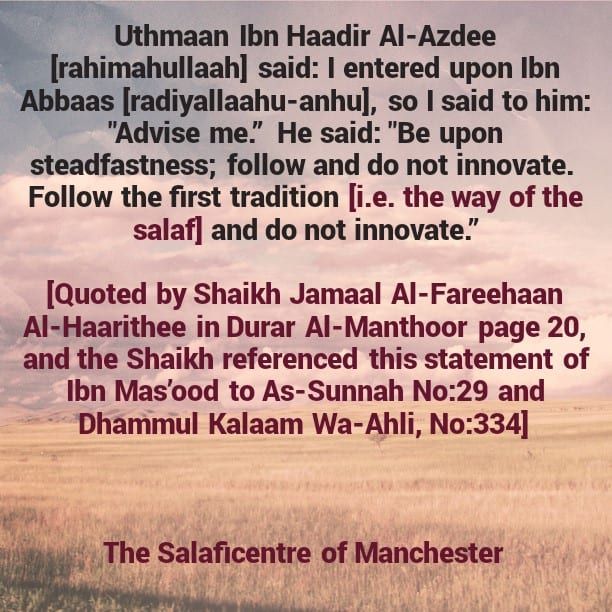 Written by The Salafi Centre of Manchester on October 11, 2012. Posted in Da'wah - Calling To Islam, The Salaf - Pious Predecessors.

Uthmaan Ibn Haadir Al-Azdee (rahimahullaah) said: I entered upon Ibn Abbaas (radiyallaahu-anhu), so I said to him: ”Advise me.”  He said: ”Be upon steadfastness; follow and do not innovate.  Follow the first tradition (i.e. the way of the salaf) and do not innovate.”

[Quoted by Shaikh Jamaal Al-Fareehaan Al-Haarithee in Durar Al-Manthoor page 20, and the Shaikh referenced this statement of Ibn Mas’ood to As-Sunnah No:29 and Dhammul Kalaam Wa-Ahli, No:334]

Our Salaf: Mu-aadh Bin Jabal (radiyallaahu-anhu)– The station of Knowledge

Written by Abdullah Jallow on October 10, 2012. Posted in Da'wah - Calling To Islam, The Salaf - Pious Predecessors.

Knowledge is obligatory upon you, for indeed seeking it is worship; learning it for the sake of Allaah is a good deed; giving it freeing to its people is a seeking to get close to Allaah; teaching it to the one who does not know about it is charity; researching it is Jihaad and revising it is glorification (of Allaah).

Our Salaf: Imaam Ahmad–I never wrote down a hadeeth except that……..

Written by The Salafi Centre of Manchester on October 8, 2012. Posted in Da'wah - Calling To Islam, The Salaf - Pious Predecessors.

”I never wrote down a hadeeth except that I acted on it at least once, so that it may not be a proof against me.”