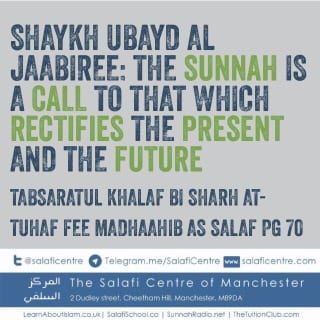 The Call of The Sunnah- Shaykh Ubayd Al Jaabiree

Shaykh Ubayd Al Jaabiree: The Sunnah is a call to that which rectifies the present and the future.
Tabsaratul Khalaf bi Sharh At-Tuhaf fee Madhaahib As Salaf Pg 70

And the first to embrace Islam of the Muhajirun (those who migrated from Makkah to Al-Madinah) and the Ansar (the citizens of Al-Madinah who helped and gave aid to the Muhajirun) and also those who followed them exactly (in Faith). Allah is well-pleased with them as they are well-pleased with Him. He has prepared for them Gardens under which rivers flow (Paradise), to dwell therein forever. That is the supreme success. (At Tawbah: 100)

We should all reflect upon this āyah, if we truly desire Allah – subhaanahu wa ta’aala – to be pleased with us.

These people (the one who is ignorant and the one who chooses not to follow) are not upon the methodology of the Salaf and neither are they Salafi; because they have not fulfilled the condition Allah has mentioned in the verse that the Salaf are followed with precision.

Two affairs are required from the one who wants to tread upon the path and methodology of the praiseworthy generations:

1: Knowledge and awareness of what the Salafi Methodolgy is; this requires studying the Methodology, studying the Aqeedah (creed).

2: Clinging and holding tight to this Methodology and its principles regardless of any harms that may come your way; harm from the opposers, being reviled and called evil names.

This requires patience and knowing that this path that you are treading is the straight and upright path; the path of Allah, so be patient and firm and cling to the Salafi Methodology.”

Paraphrased from the lecture of Shaykh Saalih Al Fawzaan:

Is there an old Salafiyyah & a new Salafiyyah? Shaykh Ahmad An-Najmee -Rahimahullah

As-Salafiyyah is one Salafiyyah, and whomsoever claims that there is an old Salafiyyah and a new Salafiyyah has indeed lied. When we contemplate on the Aqeedah of the Salaf from the time of the companions until our time, we find it is one Aqeedah. They did not differ regarding it. And if they did differ it was in the subsidiary rulings which are not from the foundations (usool) and not from the Aqeedah, they differed in this (subsidiary rulings) whilst not one of them censured the other (due to the differing in subsidiary issues).

This is the path of the companions – May the pleasure of Allah the Most High be upon them.

As for the Aqeedah, the methodology with regards to it is one, from the time of the Sahaabah until now.

Lecture by Ustaadh Abu Khadeejah (may Allaah preserve him)

Distinguishing Signs of The People of Sunnah

Written by The Salafi Centre of Manchester on December 21, 2012. Posted in Lessons.

Alhamdulillaah we received confirmation that Shaykh Muhammad Ramzaan Al Haajiri will deliver us a talk via telephone,

Title: Principles in calling to Salafiyyah.

We thank Allah for bringing about this fursa (opportunity)

Sisters side will be opened. It will be in Arabic Only

The translation will be next Friday insha’Allah.