A Valuable Book –InShaaAllaah- to Have if We Are Able

Arabic: A Treatise on the Subject Matter of the Times of the Prayer –By Shaikh Muhammad Baazmool

Shaikh Muhammad Baazmool (may Allaah preserve him) gives a brief explanation on ahaadeeth found in Muwatta Imaam Maalik on the subject matter of the times of the prayer and other affairs related to them. So get a copy and benefit from it if you have the ability alongside your regular attendance at the Duroos in the Salafi Masaajid and Centres. The Imaams and Mu’addhins in particular will find a lot of fawaa’id in this Treatise – either as a reminder or something new to learn InShaaAllaah. May Allaah grant us fiqh in the Religion Aameen.

[3] The Reality of Ascription: [Ascribing Oneself to a Land or Country]

Written by The Salafi Centre of Manchester on May 31, 2016. Posted in Morals and Manners - 'Akhlaaq', Scholars of Islam, Seeking Knowledge, The Salaf - Pious Predecessors.

Ascribing oneself to a land –the birth place of a person- and having love for a country is affirmed by Islaam. Az-Zuhriy stated, ‘’Abu Salamah Ibn Abdir-Rahmaan informed us that Abdullaah Ibn Adiy Ibn Al-Hamraa’i Az-Zuhriy informed him that he heard the Prophet (sallal-laahu-alayhi-wasallam), whilst he was standing at Al-Hazwarah Market, (saying): “By Allah! You are the best land of Allah, the most beloved land of Allah to Allah. Had I not been driven out of you, I would not have left you. [Ref 1]

The scholars attribute themselves to the place of their birth, for example you find them saying: Such and such was born in Makkah, brought up in Shaam and died in Misr. The books of biography and the (the books stating the different levels of trustworthiness of the narrators of Hadeeth) are filled with this. [End of quote..(Source: Silsilah Ar-Rasaa’il Al-Manhajiyyah Fin-Nus’hi Wal-Irshaad Wat-Taw’iyah’ page 51’ abridged and slightly paraphrased)]

Reminder: Ascribing ourselves to our countries does not necessitate nationalism, mocking at other people and being boastful etc Listen to a series of beneficial lectures here by Ustaadh Abu Khadeejah (may Allaah preserve him) about Tribalism and Nationalism: https://www.youtube.com/watch?v=8Cti6zXaWoM 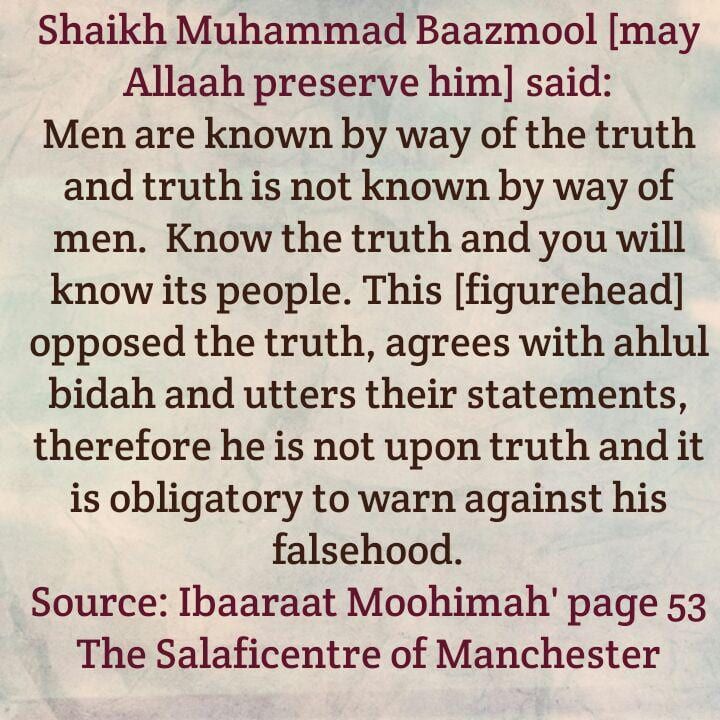 To Bring Down [or Disparage) The Leading Figureheads [i.e. Those Who Give Dawah] Is a Difficult Affair

Written by The Salafi Centre of Manchester on December 3, 2015. Posted in Da'wah - Calling To Islam, Methodology - 'Manhaj', Morals and Manners - 'Akhlaaq', Scholars of Islam, Worship - 'Ibaadah'.

This is how some of the people justify their stances towards Bidah and its people.  So whenever Bidah occurs from one of those people with fame, he refrains from exposing the bidah of that famous person and refrains from warning against him, [whilst claiming]  that to bring down the leading figure heads is a difficult affair.

This is a false justification from different angles.  From them:

[2]The obligation [in relation to this affair] is to give advice, enjoin good and forbid evil.  His fame is brought to an end due to his bidah- as a warning and sincere advice to the Muslims, so that they do not fall into the falsehood he has fallen into.

[3]Truth is above everyone and from the well-known statements in that regard is [the statement]: ‘’So and so is beloved to me, but the truth is more beloved to my heart than him.’’

Therefore, when you wilfully incline towards such and such a person and keep quiet about his bidah, you have given him precedence over the truth and raised him above it. And what is there after truth except misguidance!  So regarding this [stance of yours], you have given precedence to this person -who describe as a leading figure- over the truth and thus you fall into misguidance.

[4]This saying [i.e. it is difficult to bring them down etc] is in opposition to the way of the pious predecessors, [for] they used to speak about the people.

[5]The application of this statement is in opposition to the clear methodology established by the pious predecessors with regards to acquiring knowledge, and that is: ‘Indeed this knowledge [of the sharee’ah] is Religion, so look to the one you take your religion from.’’ Therefore, how about your situation with a man from whom you take Hadeeth, Tafseer, Aqeedah and Fiqh? Do you either keep quiet about the bidah he has [based on your] claim that speaking against the leading figure heads is a difficult affair, or do you speak about him and his innovation- making his affair well known as a warning and advice, so that the people are not deceived by him and his bidah? There is no doubt that what is obligatory is to give clarification, otherwise your silence is a fraud and deception against the Muslims. And perhaps you will be the cause of his bidah and and misguidance being spread amongst the people due this [silence of yours].

[6]The reality of this statement [i.e. it is hard to bring them down] is itself an application of the manhaj of Muwaazanaat [Ref 1].  It [i.e. Muwaazanaat] is a false methodology that ruins and dilutes the Religion, whereas the truth is clear and sublime.  And within this [Muwaazanaat] is termination of the truth and disappearance of its people, except that which Allaah wills.

[7]This statement [i.e. it is hard to bring them down] embraces illegal partisanship. It [embraces] love and hate for the sake of the one being described as a leading figure head.  He [i.e. this figure head] is made a basis for love and hate in replacement of the truth, and this [attitude] is from the characteristics of those people who follow the satanic paths- those who call their adherents to the hell fire.

[9]What is a leading figurehead in your view? In your view, how did this man become one of the leading figure heads?  Who is it that has either clarified for you or him that he is a leading figure head?  O my brother, a person should know his limitations.  It has been reported in an authentic hadeeth from Iyaad Bin Himaar that the Prophet (sallal-laahu-alayhi-wasallam) said: ‘Allaah revealed to me that you must be humble, so that no one is haughty towards another person nor oppressive towards another person.’

[10]The lowering of a man or being raised is something in the hands of Allaah, and He [The Most High] alternates it how He pleases and it is not in our control.

Fulfil the obligation you have been commanded and that is to clarify the truth; disapprove evil and warn against the bidah of this figure head.  If he accepts the [truth], humbles himself, returns to the [truth] and repents to Allaah, then Allaah will raise his status if He [The Most High] wills because Allaah raises one who humbles himself in His presence. But if he oppresses and transgresses, then this man is from Ahlul Bidah; [so] how can you shed tears for him and that he has been degraded?! Glorified Be Allaah and Free is He from all imperfections, weaknesses and faults! [Source: Ibaaraat Moohimah’ pages 53-55’ abridged and slightly paraphrased]

Ref A: See articles about the bidah of Muwaazanaat:  http://www.salafipublications.com/sps/sp.cfm?secID=MNJ&subsecID=MNJ12&loadpage=displaysubsection.cfm