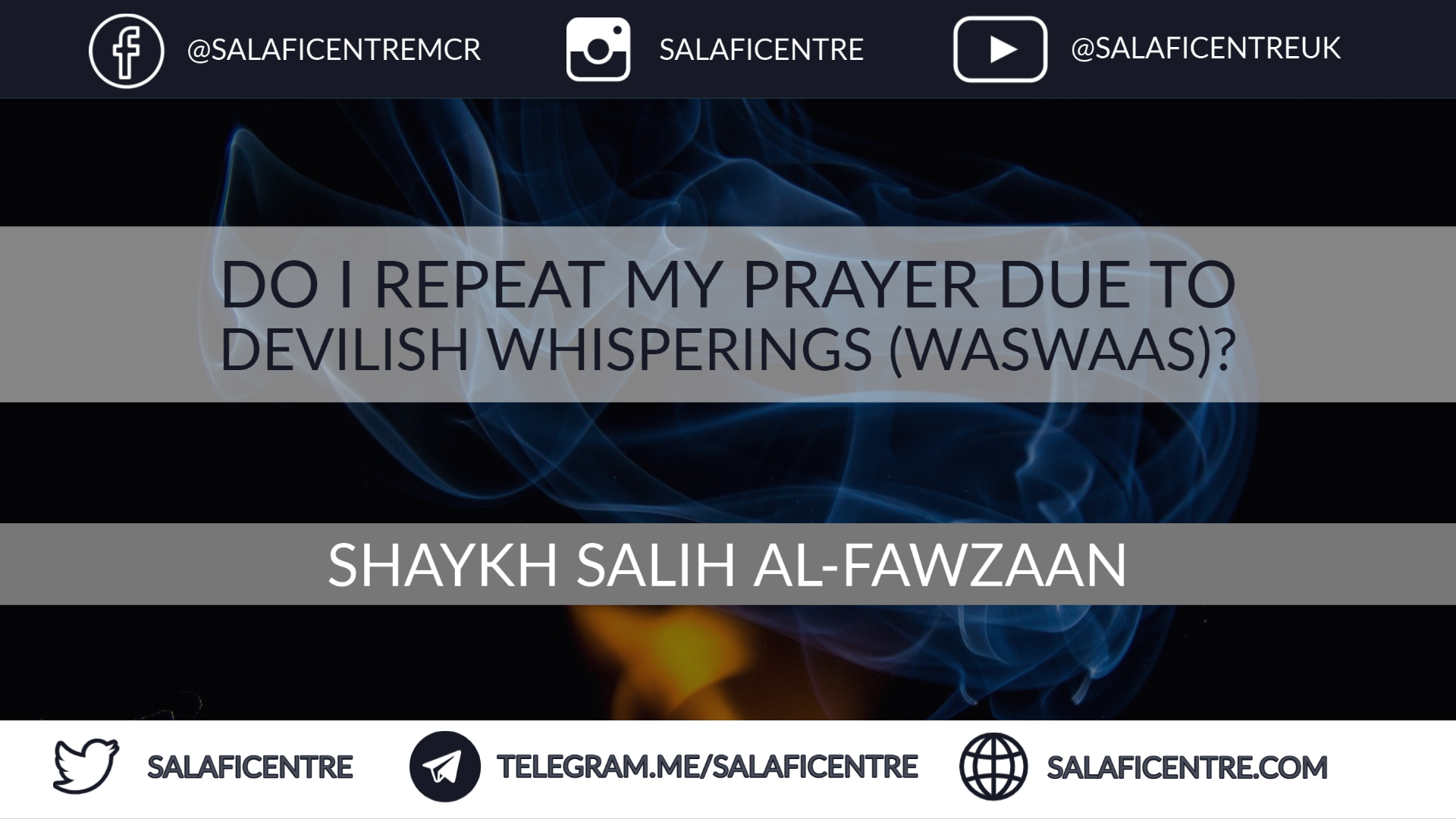 Written by The Salafi Centre of Manchester on April 27, 2020. Posted in Ramadhan.

Indeed from the great deprivation and heavy loss is that you see many of the Muslims spending this precious time in that which does not benefit them.

They stay up at night engaging in worthless entertainment but when the time to stand in prayer comes they sleep through it, causing themselves to miss out on a great amount of good. 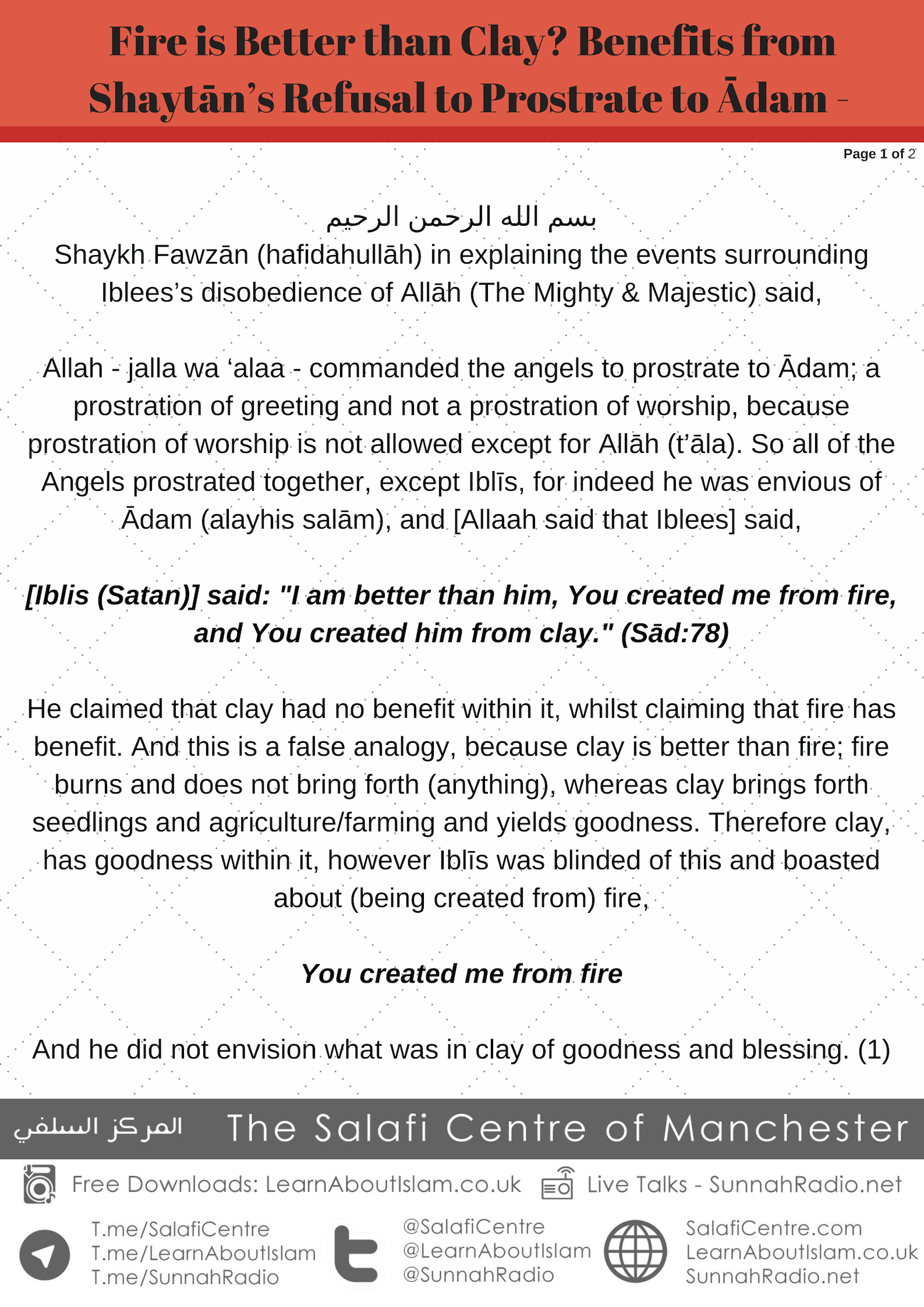 He claimed that clay had no benefit within it, whilst claiming that fire has benefit. And this is a false analogy, because clay is better than fire; fire burns and does not bring forth (anything), whereas clay brings forth seedlings and agriculture/farming and yields goodness. Therefore clay, has goodness within it, however Iblīs was blinded of this and boasted about (being created from) fire,

You created me from fire

And he did not envision what was in clay of goodness and blessing. (1)

This was a deed which was specified in the divine law revealed to Yoosuf [alayhis salaam], and likewise was the case when the Angels prostrated to Aadam- a specific prostration which Allaah allowed the Angels to perform and [likewise] the brothers of Yusuf. 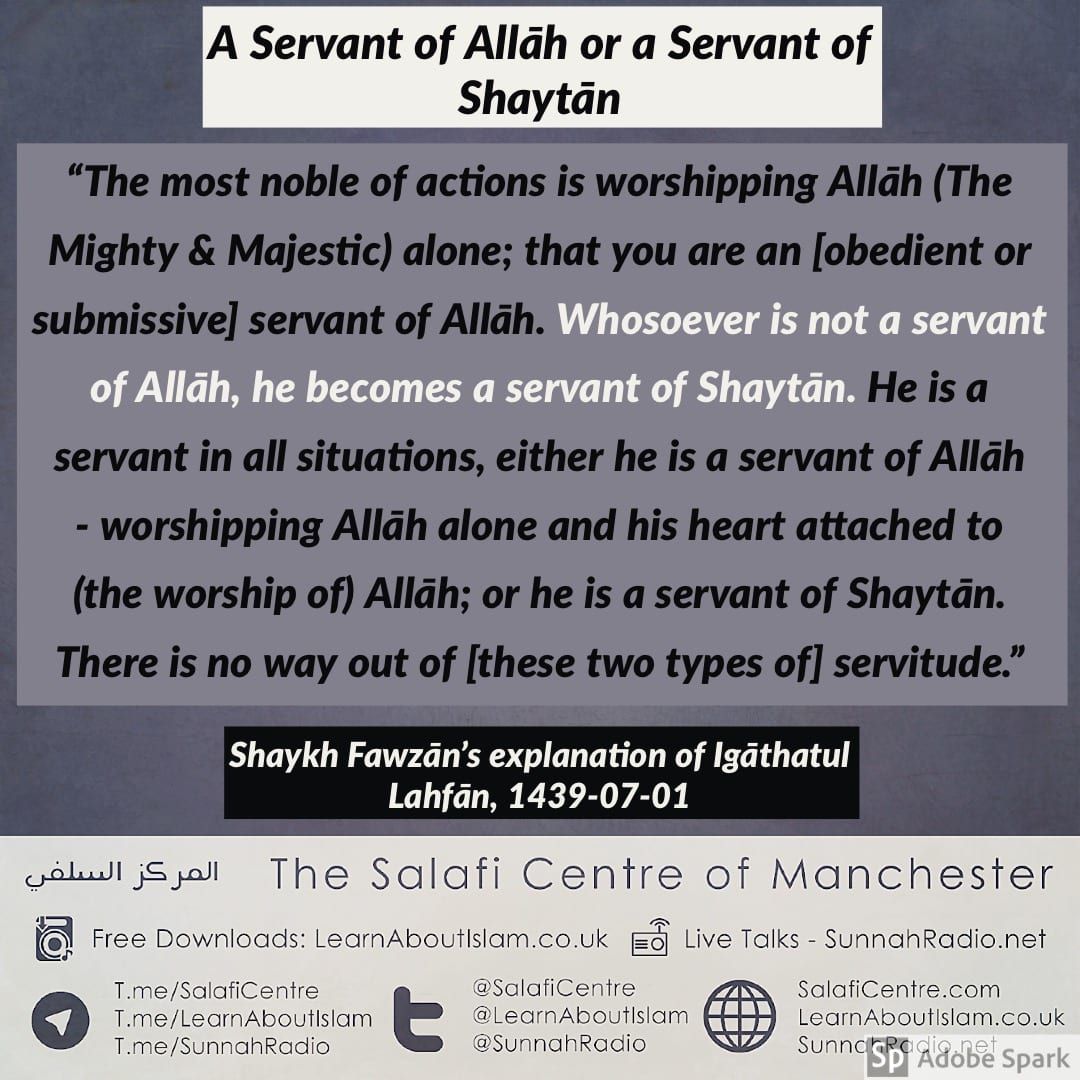 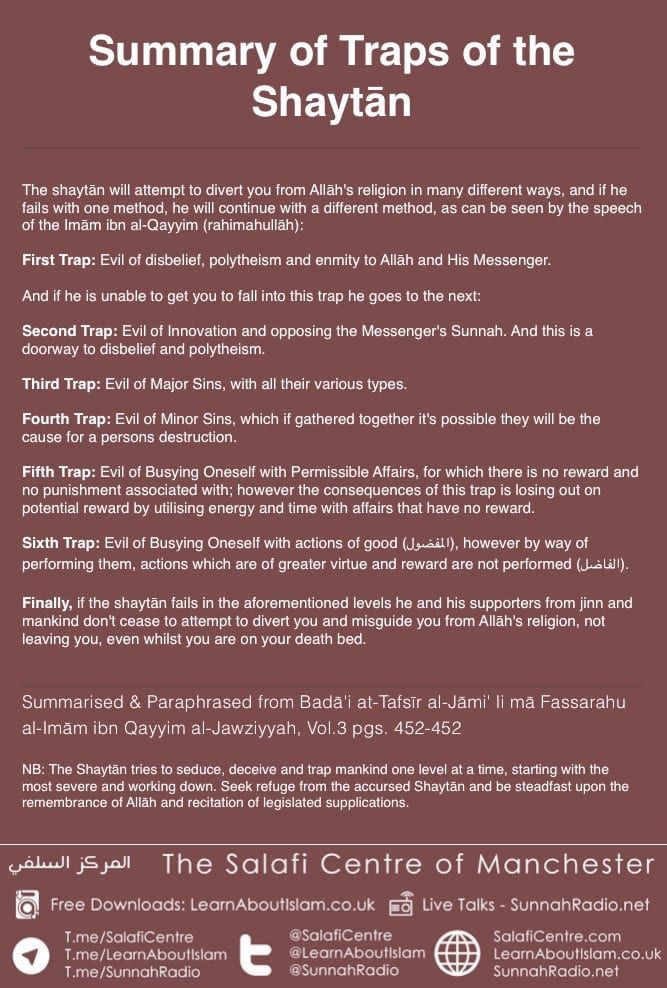 Summary of Traps of the Shaytān – Ibn al-Qayyim

Summary of Traps of the Shaytān

The shaytān will attempt to divert you from Allāh’s religion in many different ways, and if he fails with one method, he will continue with a different method, as can be seen by the speech of the Imām ibn al-Qayyim (rahimahullāh):

Evil of disbelief, polytheism and enmity to Allāh and His Messenger.

And if he is unable to get you to fall into this trap he goes to the next:

Evil of Innovation and opposing the Messenger’s Sunnah. And this is a doorway to disbelief and polytheism.

Evil of Major Sins, with all their various types.

Evil of Minor Sins, which if gathered together it’s possible they will be the cause for a persons destruction.

Evil of Busying Oneself with Permissible Affairs, for which there is no reward and no punishment associated with; however the consequences of this trap is losing out on potential reward by utilising energy and time with affairs that have no reward.

Evil of Busying Oneself with actions of good (المفضول), however by way of performing them, actions which are of greater virtue and reward are not performed (الفاضل).

Finally if the shaytān fails in the aforementioned levels he and his supporters from jinn and mankind don’t cease to attempt to divert you and misguide you from Allāh’s religion, not leaving you, even whilst you are on your death bed.

NB: The Shaytān tries to seduce, deceive and trap mankind one level at a time, starting with the most severe and working down. Seek refuge from the accursed Shaytān and be ardent upon the remembrance of Allāh and recitation of legislated supplications. 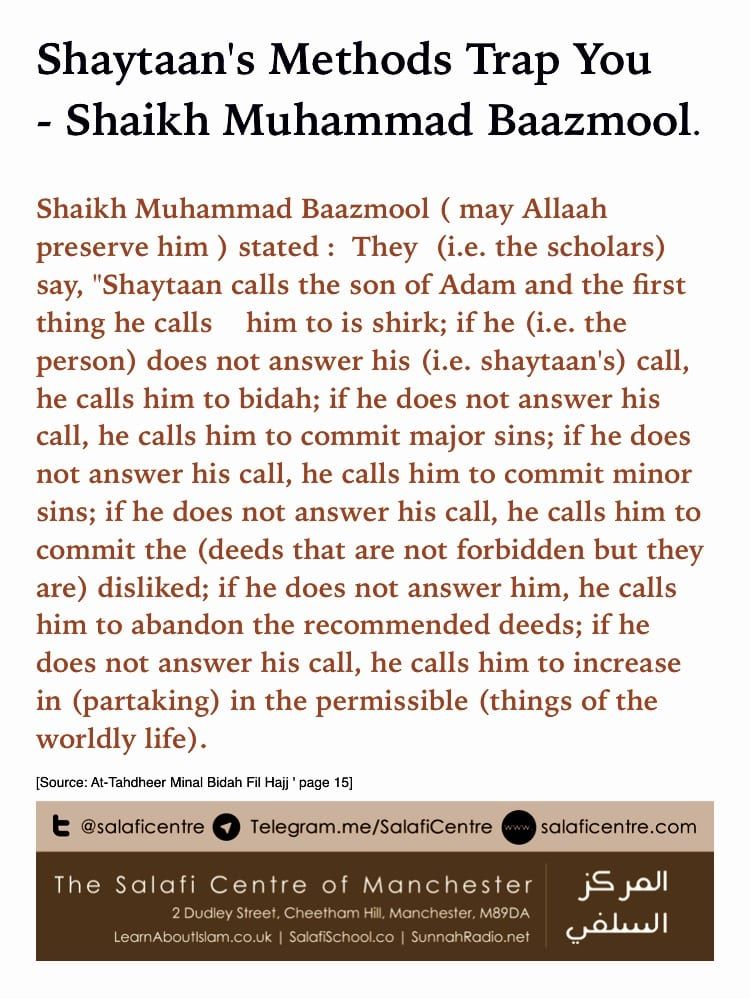 Written by The Salafi Centre of Manchester on April 4, 2016. Posted in Morals and Manners - 'Akhlaaq', Purification of The Soul. 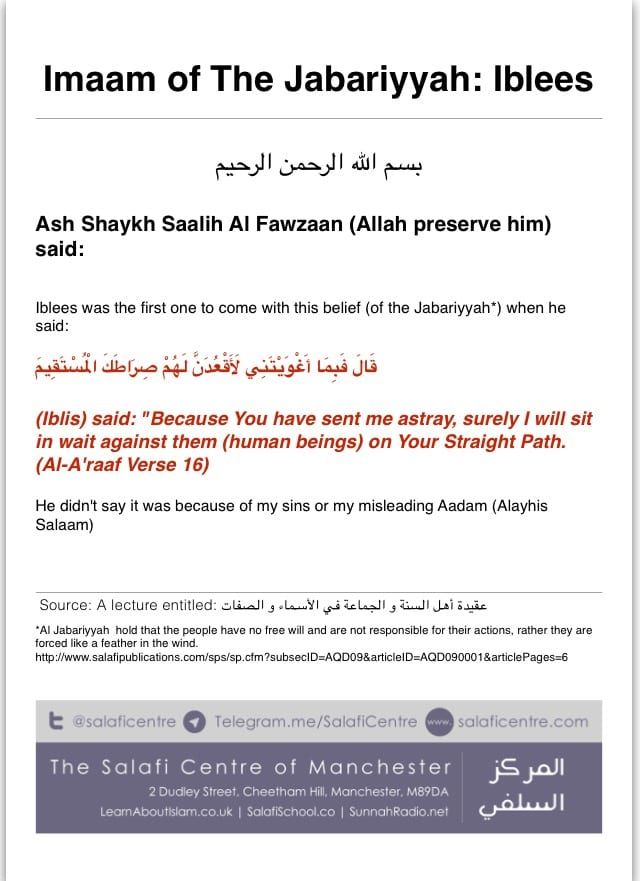 Iblees was the first one to come with this belief when he said:

(Iblis) said: “Because You have sent me astray, surely I will sit in wait against them (human beings) on Your Straight Path. (Al A’raaf Verse 16)

He didn’t say it was cos of my sins or my misleading Aadam. Alayhis Salaam
Source: A lecture entitled:

“Al Jabariyyah  hold that the people have no free will and are not responsible for their actions, rather they are forced like a feather in the wind.” 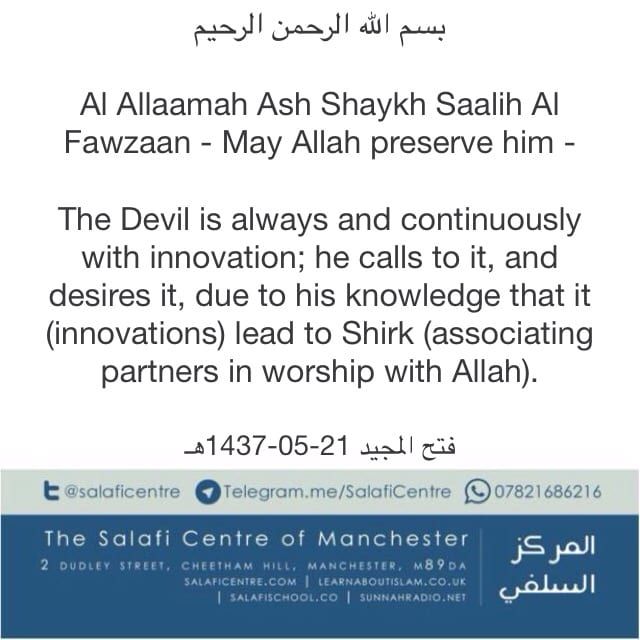 “The Devil is always and continuously with innovation; he calls to it, and desires it, due to his knowledge that it (innovations) lead to Shirk (associating partners in worship with Allah).”