(During ‘itikaaf and outside of ‘itikaaf) a person should speak for that which he needs for religious and worldly affairs as for pointless superfluous speech then there is no benefit in it from two angles:

1. The wasting of a persons time and busying him away from the remembrance of Allah.

2. It’s possible and refuge is sought with Allah, that the speech may be impermissible and his speech may nullify his actions, because he utters a statement which Allah is angered by. It is possible a person could nullify all of his actions and apostate from Islam (1), therefore speech can be dangerous for a person if he does not safeguard it, and there is no curing it except by ‘itikaaf because when a person isolates himself solely for the worship of Allah, he accustoms himself and trains himself upon little speech and upon the restraining of his tongue.

(1) On the authority of Abu Hurayrah (Allah be pleased with him) that he heard the Prophet (Peace and Blessings of Allah upon him) say,

‘Indeed a servant may utter a single word and because of it plummet into the Hellfire farther than the distance between the east and the west.’ Bukhari 6477 Muslim 2988 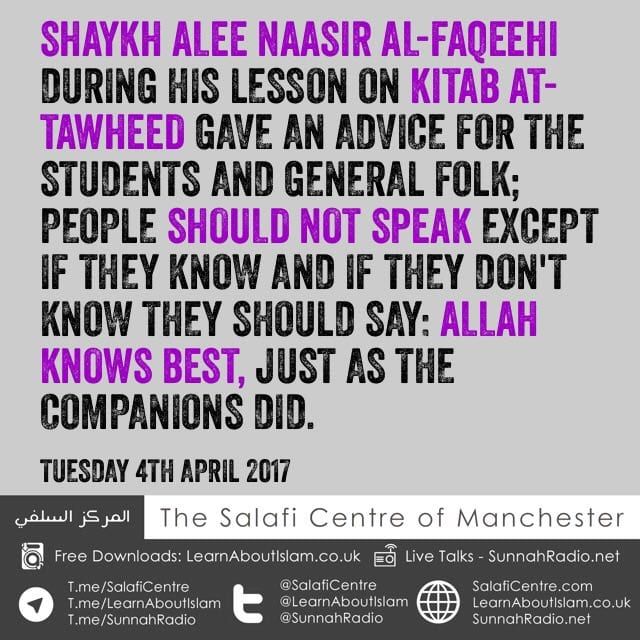 Shaykh Alee Naasir Al-Faqeehi advised the students and general folk regarding speaking about affairs of the religion;

People should not speak except if they know and if they don’t know they should say: Allah knows best, just as the companions did. 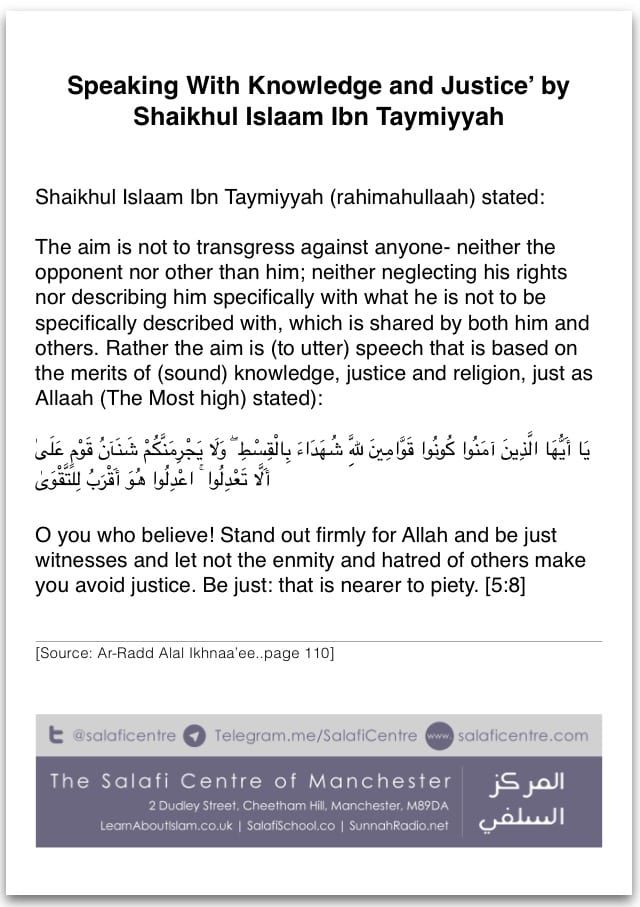 Written by Abdullah Jallow on May 7, 2016. Posted in Articles, Morals and Manners - 'Akhlaaq', Scholars of Islam.

The aim is not to transgress against anyone- neither the opponent nor other than him; neither neglecting his rights nor describing him specifically with what he is not to be specifically described with, which is shared by both him and others. Rather the aim is (to utter) speech that is based on the merits of (sound) knowledge, justice and religion, just as Allaah (The Most high) stated):

O you who believe! Stand out firmly for Allah and be just witnesses and let not the enmity and hatred of others make you avoid justice. Be just: that is nearer to piety. [5:8]

Too much joking – Shaykh Uthaymeen

Shaykh Uthaymeen – Rahimahullah -was asked a question by a group of youth who pray, fast and perform what they are able from (various) acts of worship – They said: during our rest, we joke a lot what is the ruling on this?

The Shaykh began by making dua for them:

Firstly we ask Allah – Glorified and Most High – for thabaat (steadfastness) for these brothers upon that which they perform from acts of worship and that HE makes it in the manner in which HE is pleased with and that it is in accordance to the guidance of the prophet – peace and blessings upon him and upon his family – with out going over bounds and without deficiency.

If there is a person who is excessive in joking he may speak about his brother with distasteful expressions which are not befitting. And it is possible that he will arrive at what is worse than that; his speech may mock something from the acts of worship or from the religion. And this is extremely dangerous, indeed it could result in disbelief. And refuge is sought with Allah, so upon them is that they joke moderately without excessiveness.

To speak or not to speak….

“The majority of sins of the children of Aadam (عليه الصلاة و السلام) are because of his tongue.”
Saheeh Al Jaami’ As Sagheer: Al-Albani

Know that it is befitting for every person (who has reached the age of accountability and is sane) that he preserves his tongue from all speech except if the speech is clear in its benefit.

And when the benefit in speaking or leaving speech is equal; then the Sunnah is to refrain from speaking. Because it is possible that permissible speech can be swept along and become impermissible or disliked speech and this is the norm in most cases; and there is nothing that can equal safety.