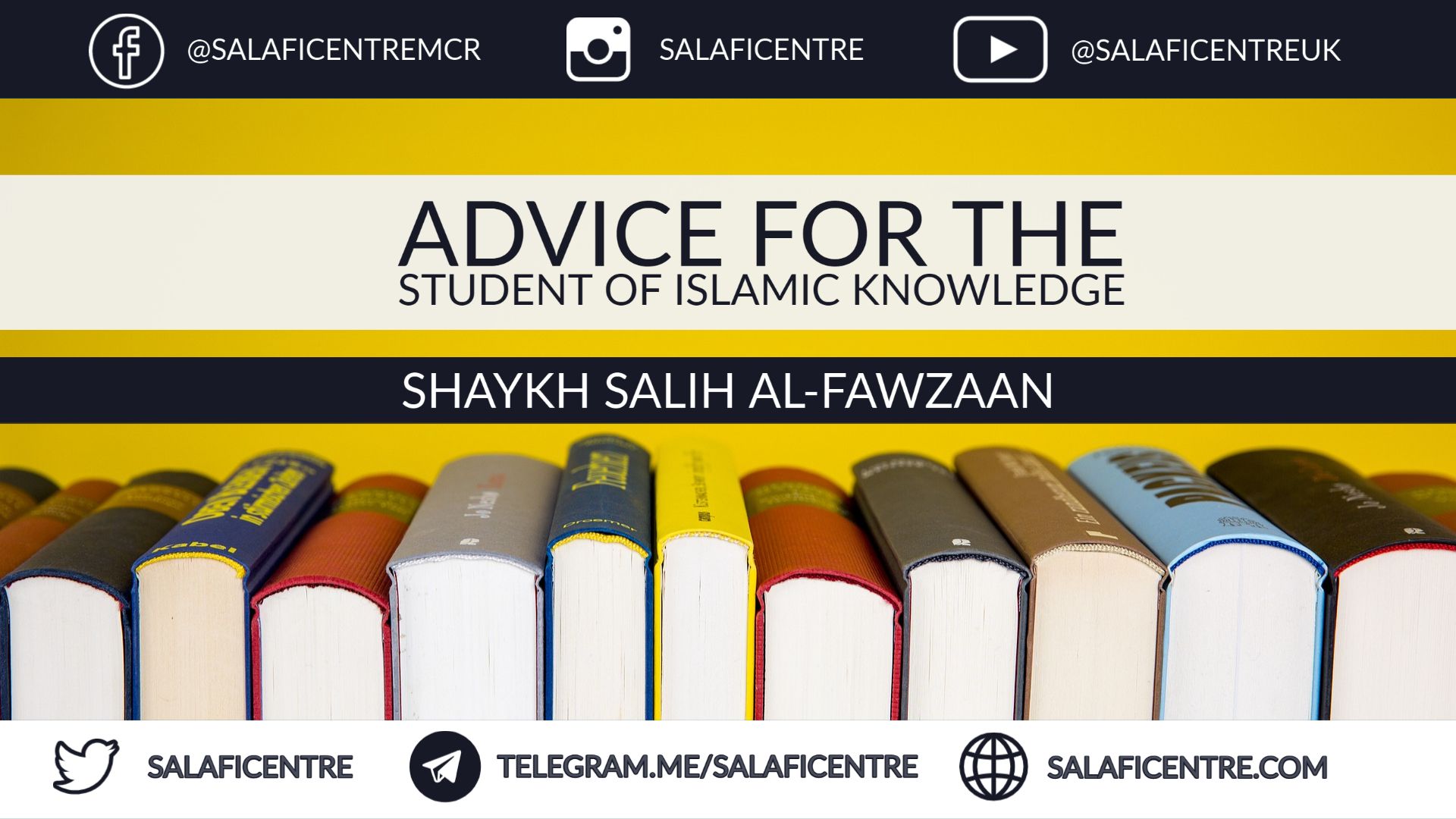 Question: What is your advice, Shaykh Salih (Al-Fawzaan), for the student of Islamic knowledge? And is it upon him to firstly begin with memorising the whole of the Noble Quran? 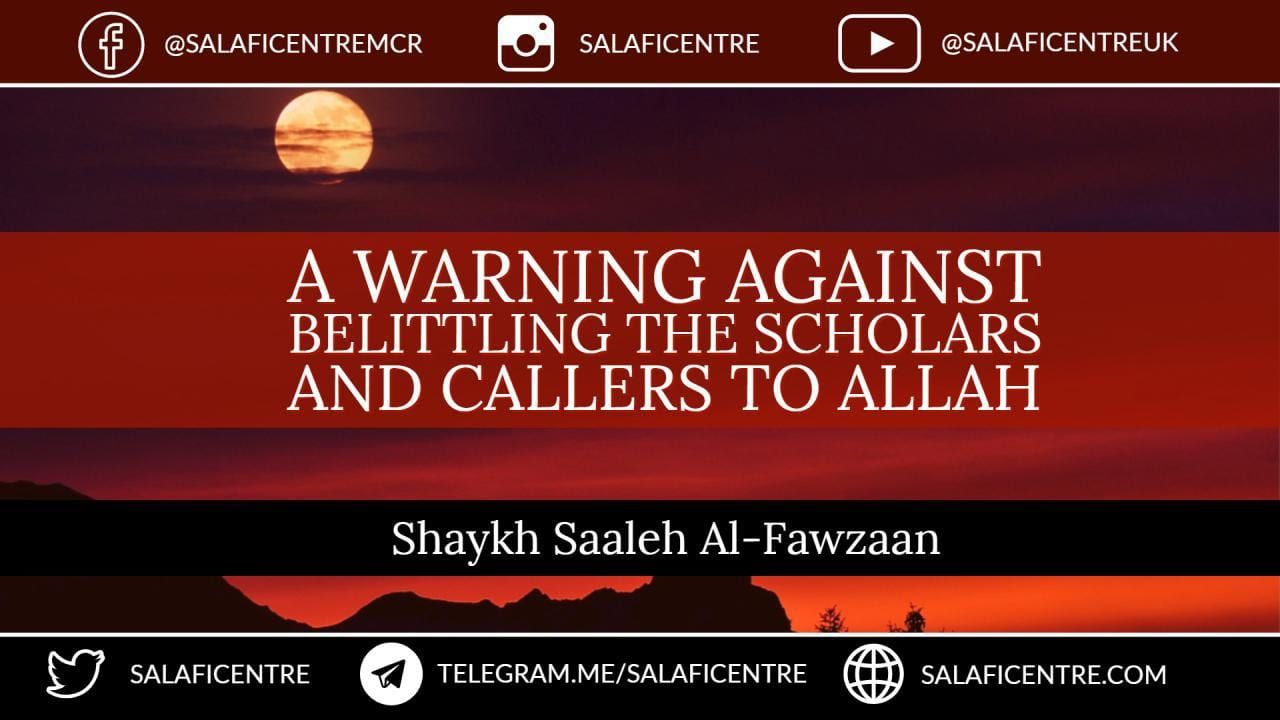 Written by on July 12, 2019. Posted in Basics, Brotherhood, Da'wah - Calling To Islam, Morals and Manners - 'Akhlaaq', Purification of The Soul, Scholars of Islam, Seeking Knowledge, Video.

He asks, Noble Shaykh, may Allah bless you. It hurts us deeply, what we see of the attempts to lower the station of our virtuous scholars, and the biggest difficulty is what we see from those weak in intellect getting carried away behind the likes of these (individuals belittling the scholars) on social media platforms. So what advice (do you have) for us and the attendees on respecting and appreciating our scholars?

Your Wife Is A Ni’mah (blessing) from Allaah! – So Educate Your Family! – Aboo Hafsah Kashiff Khan

Written by The Salafi Centre of Manchester on December 20, 2014. Posted in Da'wah - Calling To Islam, Family & Women, Worship - 'Ibaadah'.

[Stance of the students] – May Allaah grant Tawfeeq to brother Abu Abdis Salaam towards rectification.

Written by The Salafi Centre of Manchester on June 8, 2014. Posted in Brotherhood.

The stance of the students

Written by The Salafi Centre of Manchester on April 9, 2014. Posted in Da'wah - Calling To Islam, Morals and Manners - 'Akhlaaq', Pearls of Wisdom, Purification of The Soul, Scholars of Islam, Seeking Knowledge.

A Small snippet of benefit from Shaykh Muhammad bin Haadi and Shaykh Abdullah Bukhari – on Saturdays April 5th – regarding being sincere and buying books.

May Allah make us from those who strive hard and seek knowledge, and act upon it.

Question: Shaikh, I have a question concerning the issue of refuting the one who has erred. Is it incumbent upon the student of knowledge or the well-grounded student of knowledge to refer back to the scholar or senior scholars before warning against a specific individual, hizbee group/organization or innovators (in general)? Does he have to refer back to the scholar before warning?

Answer: Shaikh Rabee’ (may Allah Preserve him) was asked about this and his answer can be found on Sahab (i.e. http://www.Sahab.net) and perhaps you know of it. So he was asked about this issue, and he answered it and his answer was correct. This issue is not one (meaning it’s not the same across the board and in every situation). There are issues that are obvious, clear, and apparent of which the student of knowledge could clarify if he has the ability to do so; so one aspect would be linked to one who’s disapproving and clarifying level of knowledge, another to his ability and another to his resolve to be patient upon enduring harms. Another consideration would be his contemplation on the specific positive and negative ramifications which would necessitate decisive and specific actions, statements and judgments. So contemplation on the benefits and harms which (would translate into) direct and decisive action (is required); this would be established by the refutation or the one making the refutation. Especially, if the issue is a knowledge-based issue that the people of knowledge have already spoken about. In this case, there would be nothing preventing (the student of knowledge from boycotting and warning). Boycotting and warning are taken from the Islaamic legislation (i.e. from the Sharee’ah). [end of quote]

The following is a question raised to our noble shaikh Ahmad an-Najmy رحمه الله concerning the role students of knowledge play in clarifying the truth:

“Therefore, it is binding upon the students of knowledge – the people of understanding – the ones who know the salafi methodology, and they know concerning the other methodologies, it is binding upon them to clarify to others, and that they state and speak and deliver sermons (khutba) and that they clarify in every situation and at every suitable opportunity the truth, the truth which is binding to be followed and the falsehood that is binding to be abandoned and avoided. As for those who are silent upon clarifying the truth to the people then they are not excused due to their silence and even if they say “we are not with them” (i.e the hizbiyyoon, as is apparent upon reading the text of the full question which relates to the groups). So they are not excused even if they say “we are not with the people of these misguided groups from the truth, except that they reject and rebut that which they (the misguided groups) are upon in terms of misguidance)”.