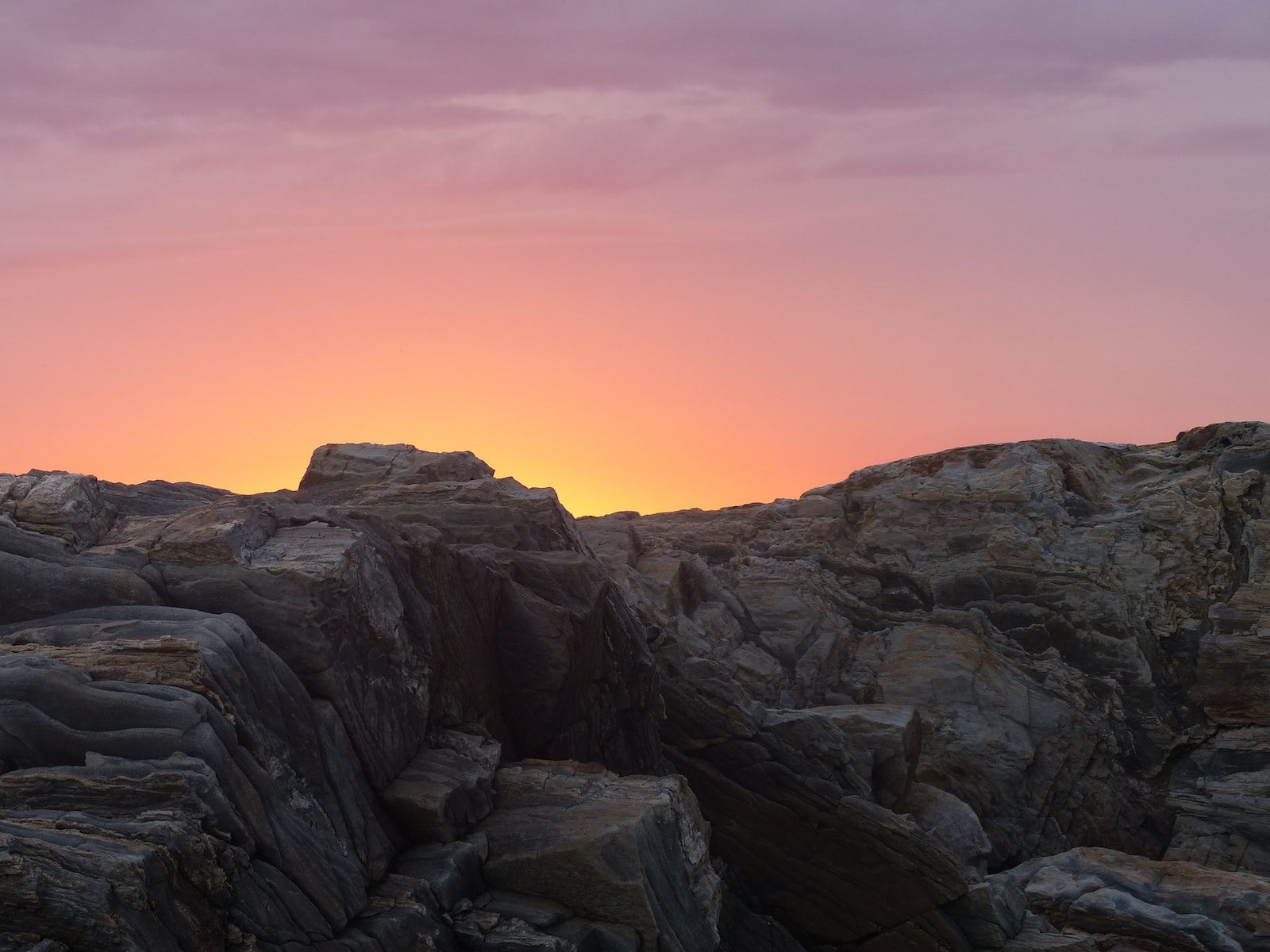 I am informing you of an important matter, and that is refutation against a mistake – the one that is apparent, widespread and well known – is a communal obligation in order to protect truth and as sincere advice for the common folk of the Ummah. It is indeed possible that the one refuted is one of the virtuous (people) of Ahlus Sunnah, however clarification of the truth with proofs is emphasised and obligated on the one who is able. It is obligated on the refuter to understand and gives concern to the sunnah in his refutation. Imam as-Sijzee (Allah’s Mercy be upon him) (1) said,

“So let the intent of the one who speaks concerning the Sunnah, be to follow it (the Sunnah) and to accept it, not (that his intent is) to win over one’s opponents. For that way (if his intent is to follow and accept the Sunnah), he will be aided through that to overcome them. As for if he wants to merely overcome (his opponents) it’s possible he is overcome.”

Shaykul Islam ibn Taymiyyah (Allah’s Mercy be upon him) said (2),

“Refutation against the people of falsehood cannot be comprehensive except when it is in agreement with the (authentic) Sunnah from every angle. And if not, the one who conforms to the (authentic) Sunnah in a particular angle and opposes it from another angle, then those arguing against him will strive (to gain something) from that angle in which he opposed the (authentic) Sunnah, and they will use it as evidence to prove what is in agreement with what they are upon (of falsehood) from those arguments that are in opposition to the (authentic) Sunnah. Indeed the common people have contemplated about what the people of falsehood used as evidence (in comparison) to those who are closer to the truth than them, so they find that the evidences of falsehood are stronger due to that which he (refuter against falsehood) left from the truth, that which Allah sent with his Messenger and revealed in His Book, so it occurs that what he left from the truth was from the greatest nullifying proof against them…”

It is Allah I ask for His favour and generosity and that He makes us from the callers to truth and its helpers, indeed he is the All Hearing, The One who Answers the Supplications. May the Peace and Blessings of Allah be upon our Prophet Muhammad, his family and his companions. 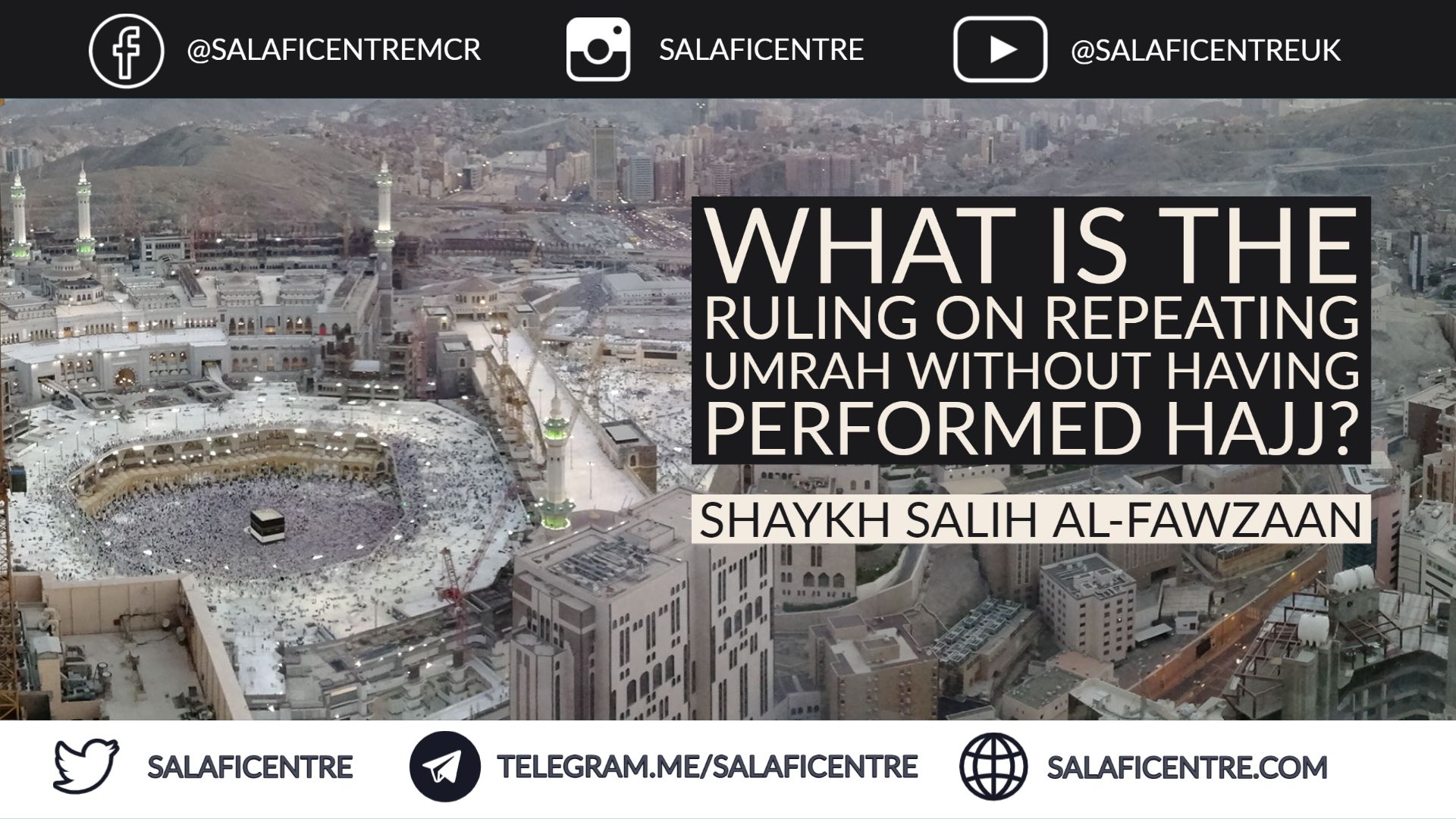 NEW VIDEO! What Is the Ruling on Repeating Umrah Without Having Performed Hajj? – Shaykh Fawzaan

Question: In terms of the person who has not performed Hajj, and wishes to perform Umrah more than once. Is this [permissible] for him? 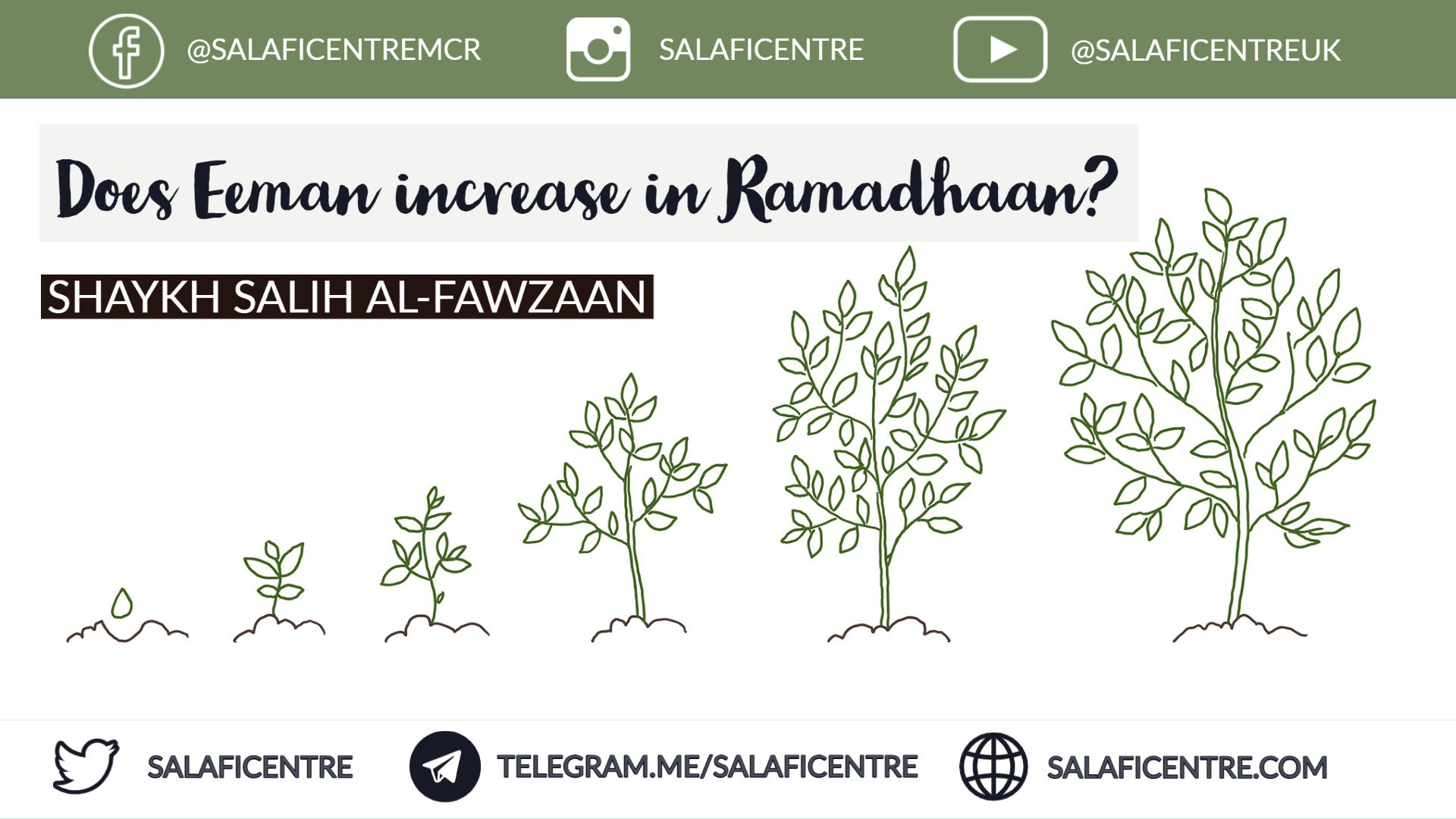 Written by The Salafi Centre of Manchester on April 18, 2022. Posted in Ramadhan, Video, Worship - 'Ibaadah'.

Eemaan is speech upon the tongue, belief in the Heart and action upon the limbs. It increases with obedience and decreases with disobedience (sins). 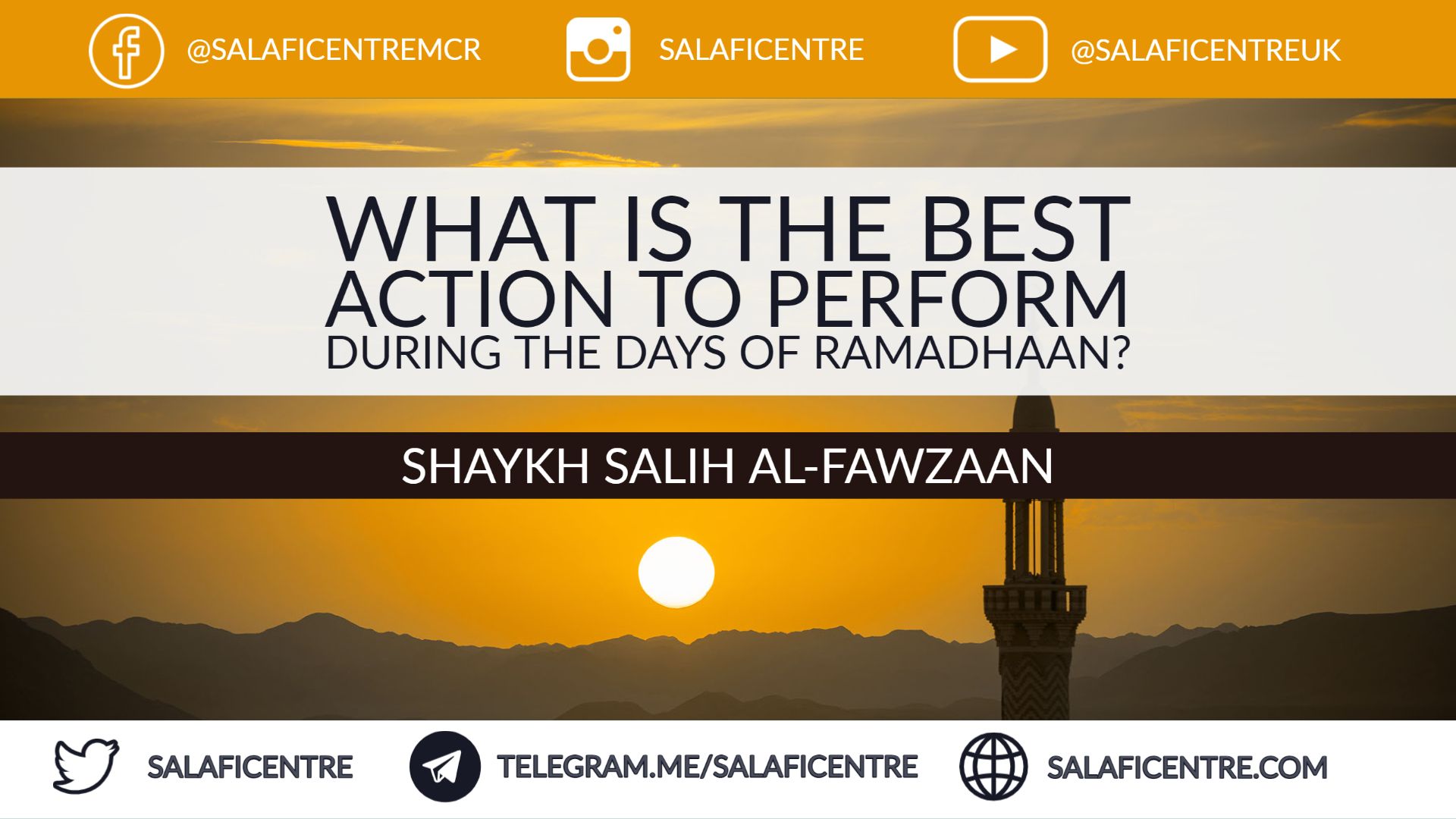 NEW VIDEO! What Is the Best Action To Perform During the Days of Ramadhaan? – Shaykh Fawzaan

Written by The Salafi Centre of Manchester on April 16, 2022. Posted in Qur'aan, Ramadhan, Video, Worship - 'Ibaadah'.

Question: What are the best actions during the day in Ramadhaan? 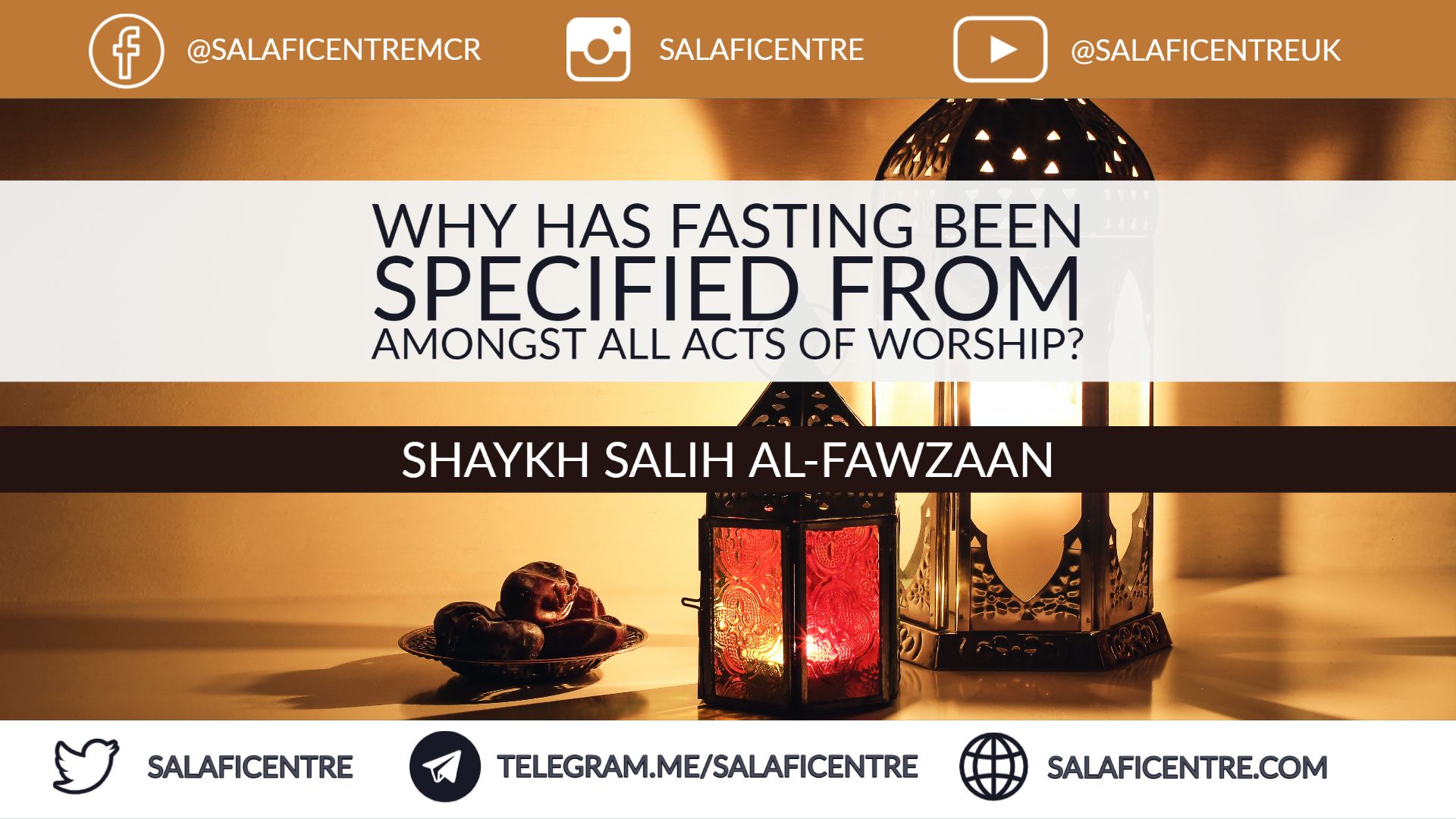 NEW VIDEO! Why Has Fasting Been Specified From Amongst All Acts of Worship? – Shaykh Fawzaan

Written by The Salafi Centre of Manchester on April 15, 2022. Posted in Fasting, Ramadhan, Video, Worship - 'Ibaadah'.

Noble Shaykh, why has fasting been specified from amongst all acts of worship in [the hadith], “fasting is for me and I will reward it”. 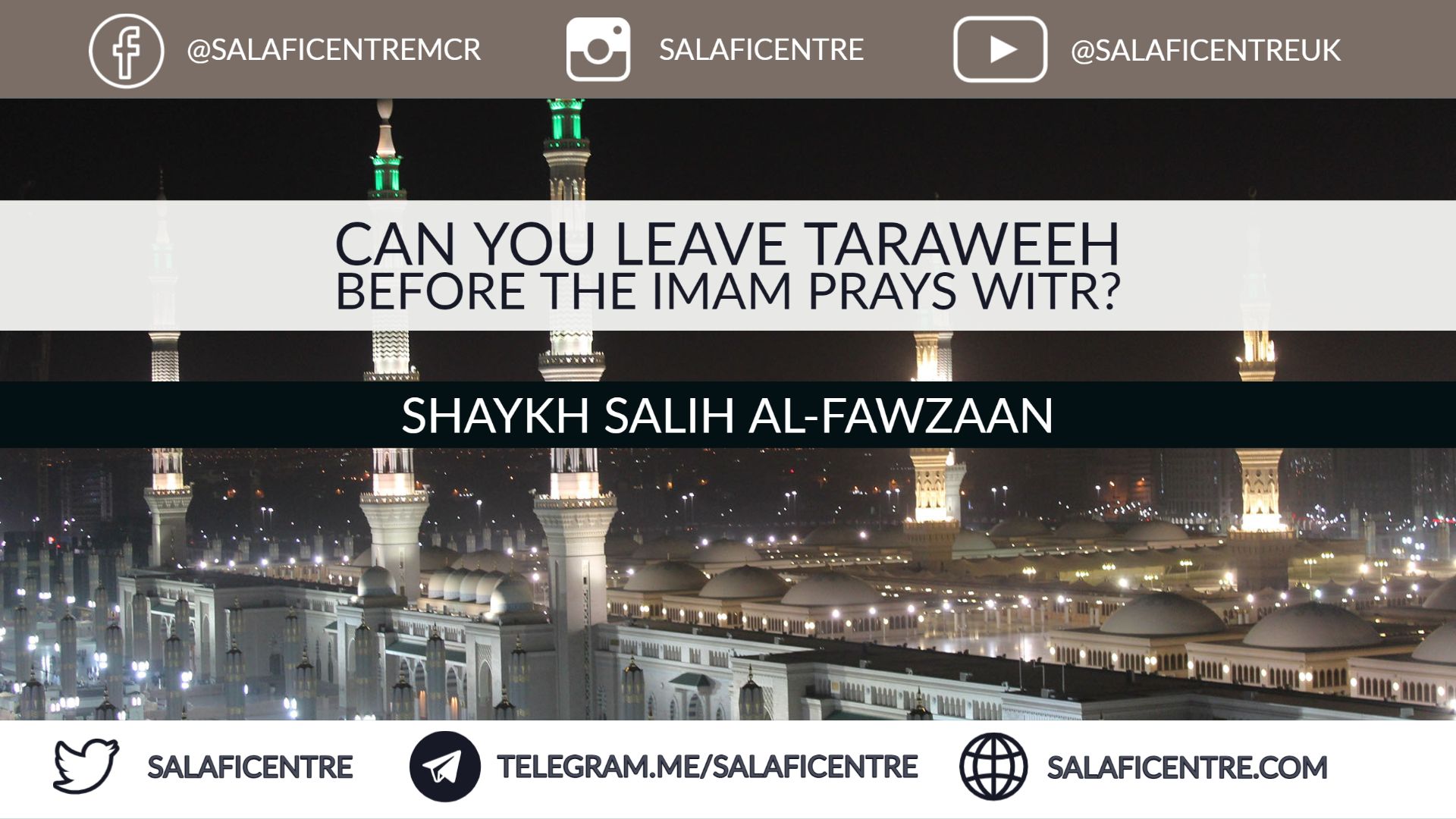 NEW VIDEO! Can You Leave Taraweeh Before the Imam Prays Witr? – Shaykh Fawzaan

Written by The Salafi Centre of Manchester on April 14, 2022. Posted in Purification of The Soul, Ramadhan, Salaah - Prayer, Video, Worship - 'Ibaadah'. 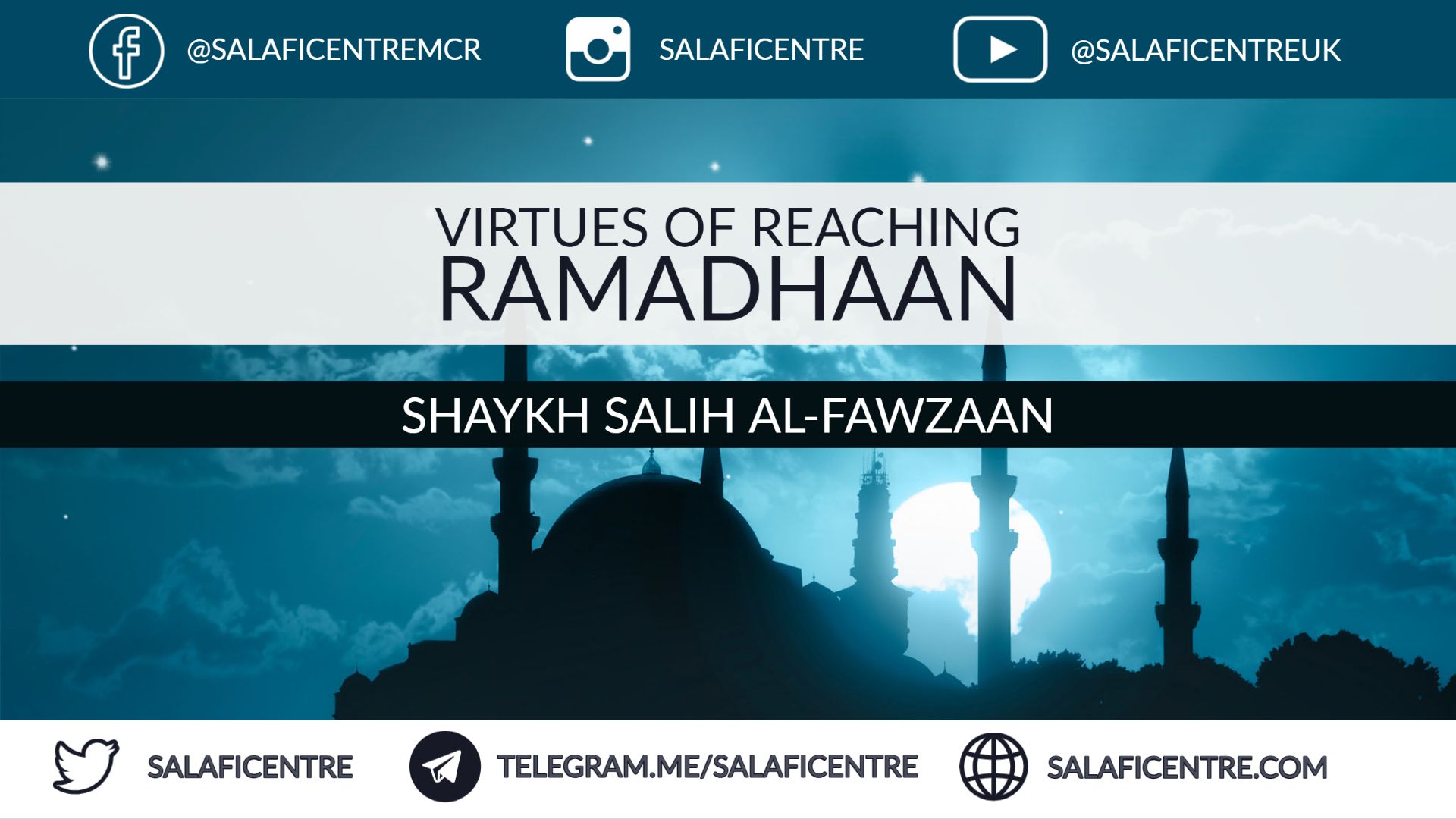 Written by The Salafi Centre of Manchester on April 12, 2022. Posted in Purification of The Soul, Ramadhan, Video, Worship - 'Ibaadah'.

We encourage ourselves and encourage our Muslim brothers to rejoice [at the arrival of] this month and to praise Allah for reaching it and to ask Allah to allow them to reach the end of it, and that He aids them to take advantage of it by fasting its days and praying its nights. 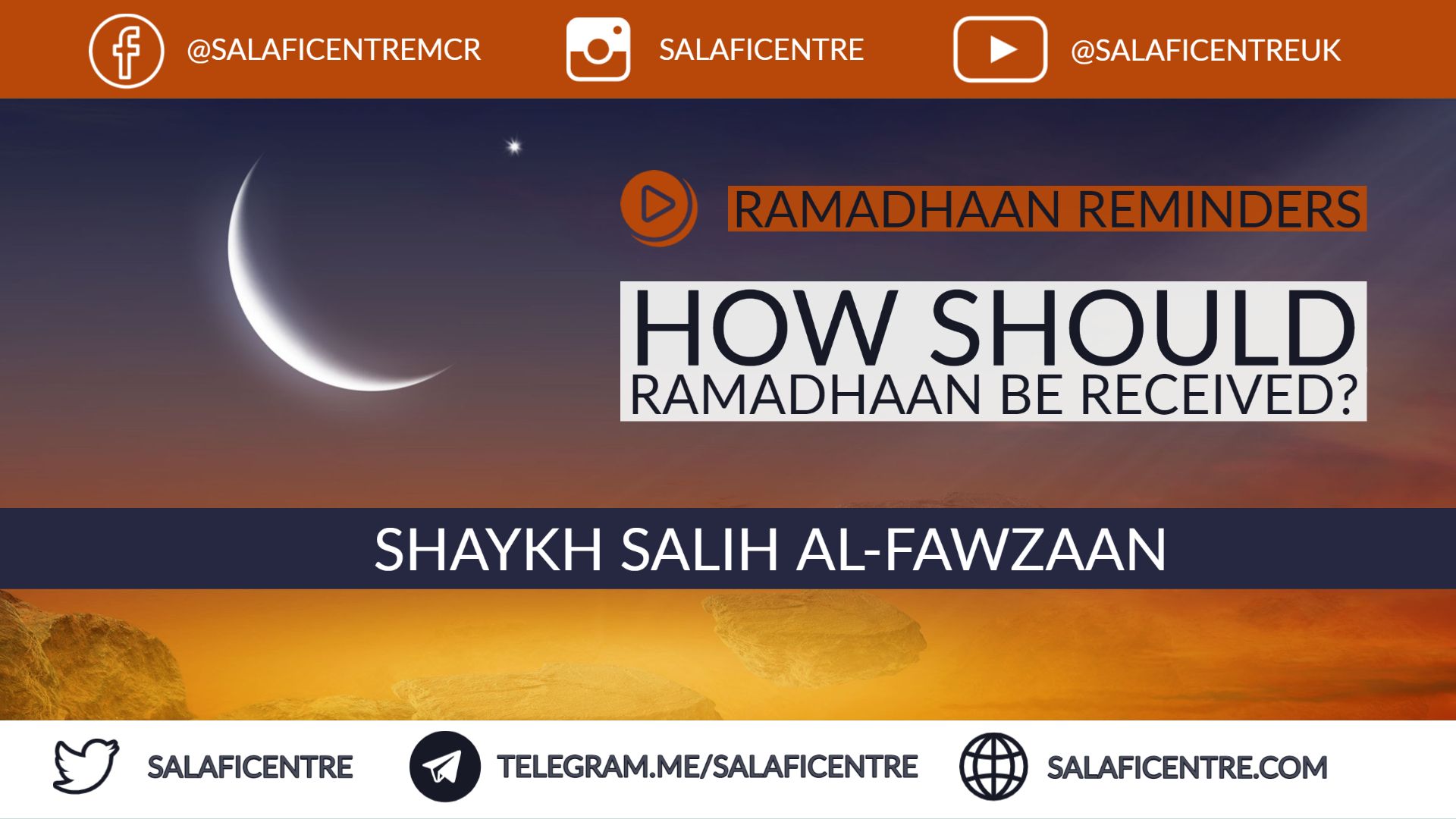 NEW VIDEO! How Should Ramadhaan Be Received? – Shaykh Fawzaan

Written by The Salafi Centre of Manchester on April 10, 2022. Posted in Purification of The Soul, Ramadhan, Sin, Video, Worship - 'Ibaadah'.

The advice is that you ask Allah, the Exalted, that He allows you to reach Ramadhaan, then ask Allah to aid you in taking advantage of it. 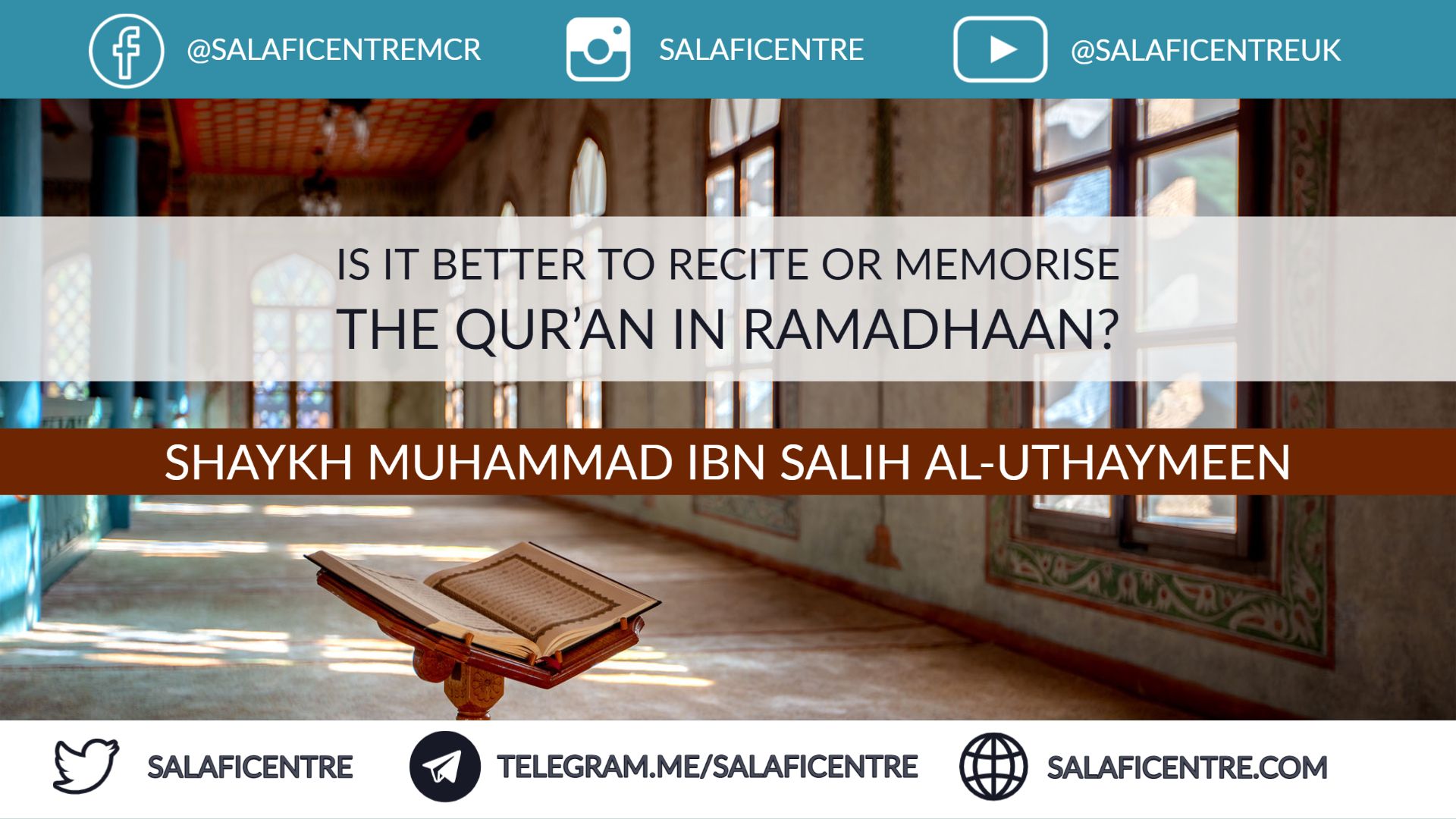 NEW VIDEO! Is It Better To Recite or Memorise the Qur’an in Ramadhaan? – Shaykh Uthaymeen

Written by The Salafi Centre of Manchester on March 30, 2022. Posted in Ramadhan, Video, Worship - 'Ibaadah'.

Question: Which is better, reciting the Qur’an looking [at the mushaf] or trying to repeat surahs to memorise? 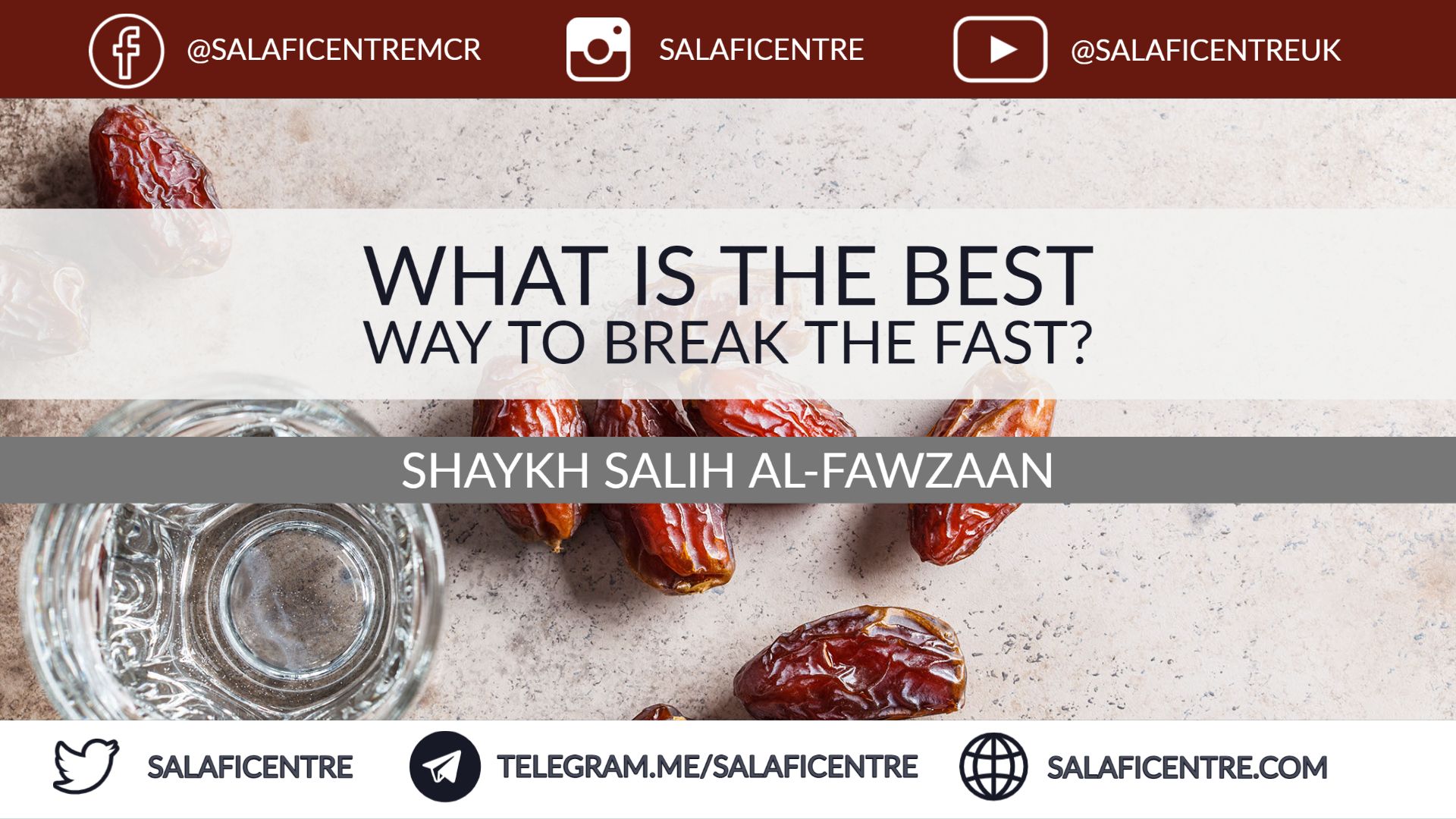 NEW VIDEO! What Is the Best Way to Break the Fast? – Shaykh Fawzaan

Written by The Salafi Centre of Manchester on March 28, 2022. Posted in Fasting, Ramadhan, Video, Worship - 'Ibaadah'.

“And he (the author) said (may Allah have mercy on him), Salmaan bin Aamir Ad-Dhibii (May Allah be pleased with him) reported that the Prophet (صلى الله عليه وسلم ) said: “When one of you breaks his fast, then let him break it with dates, if one cannot find dates, then let him break the fast with water as it’s pure”

Watch the full video for the Shaykh’s explanation!