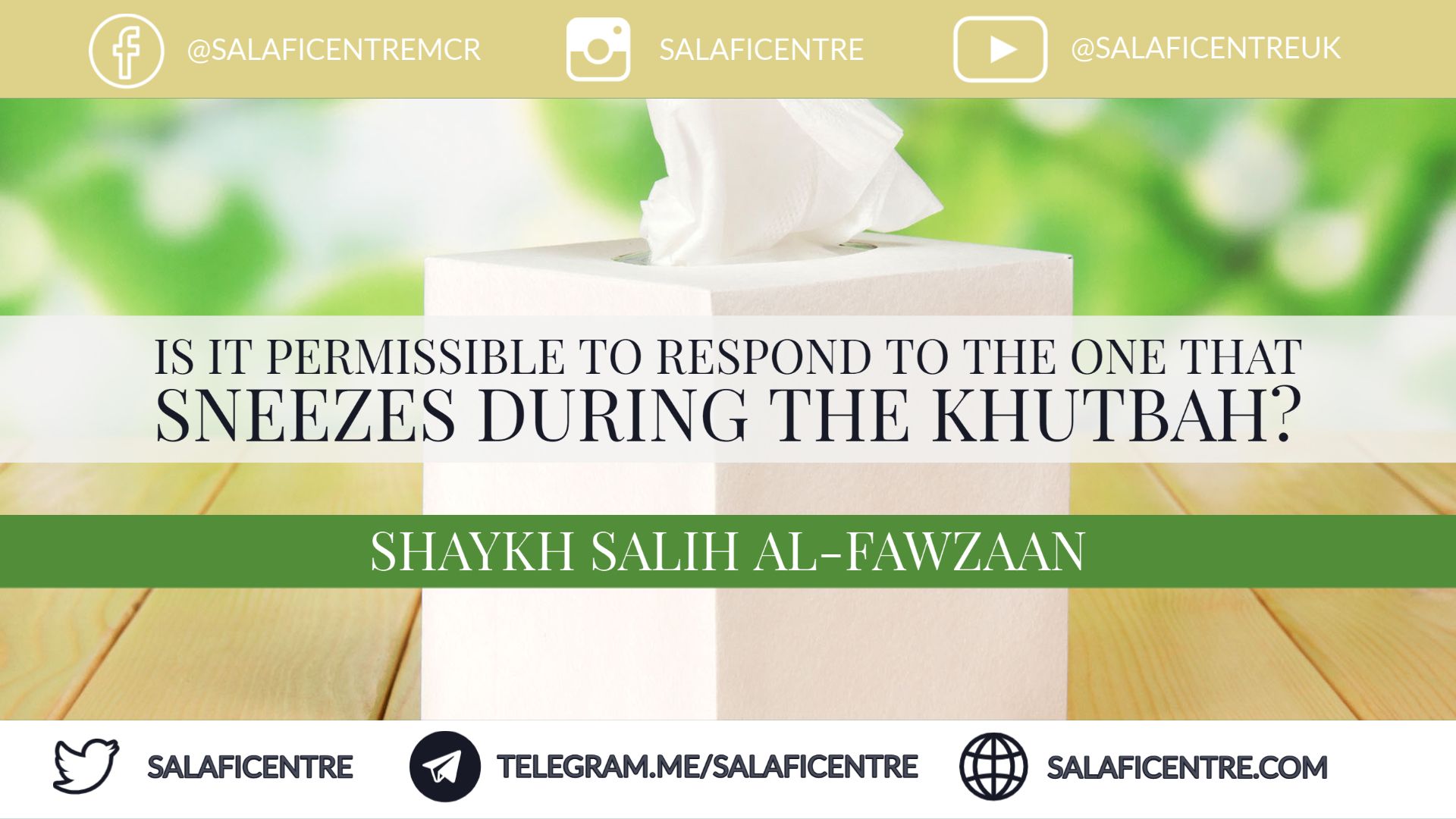 NEW VIDEO! Is it Permissible to Respond to the One that Sneezes During the Khutbah? – Shaykh Fawzaan

Written by The Salafi Centre of Manchester on November 14, 2021. Posted in Fatawa-Rulings, Video, Worship - 'Ibaadah'.

Question: What is the ruling regarding responding to one that sneezes during the Friday sermon (khutbah)? 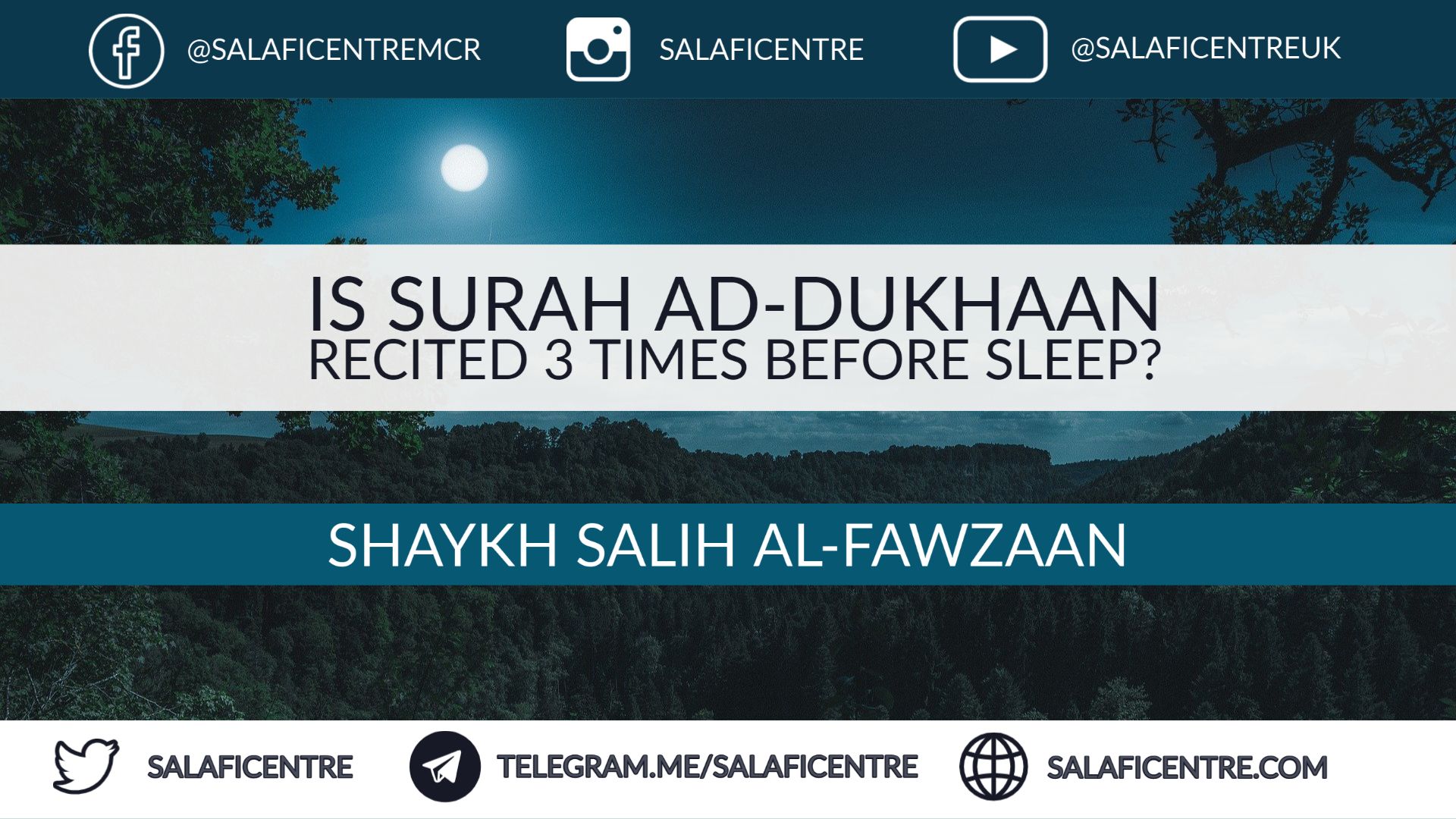 Question: Is it correct that reciting Surah Ad-Dukhaan 3 times before sleep protects one from the evil plots of the people? 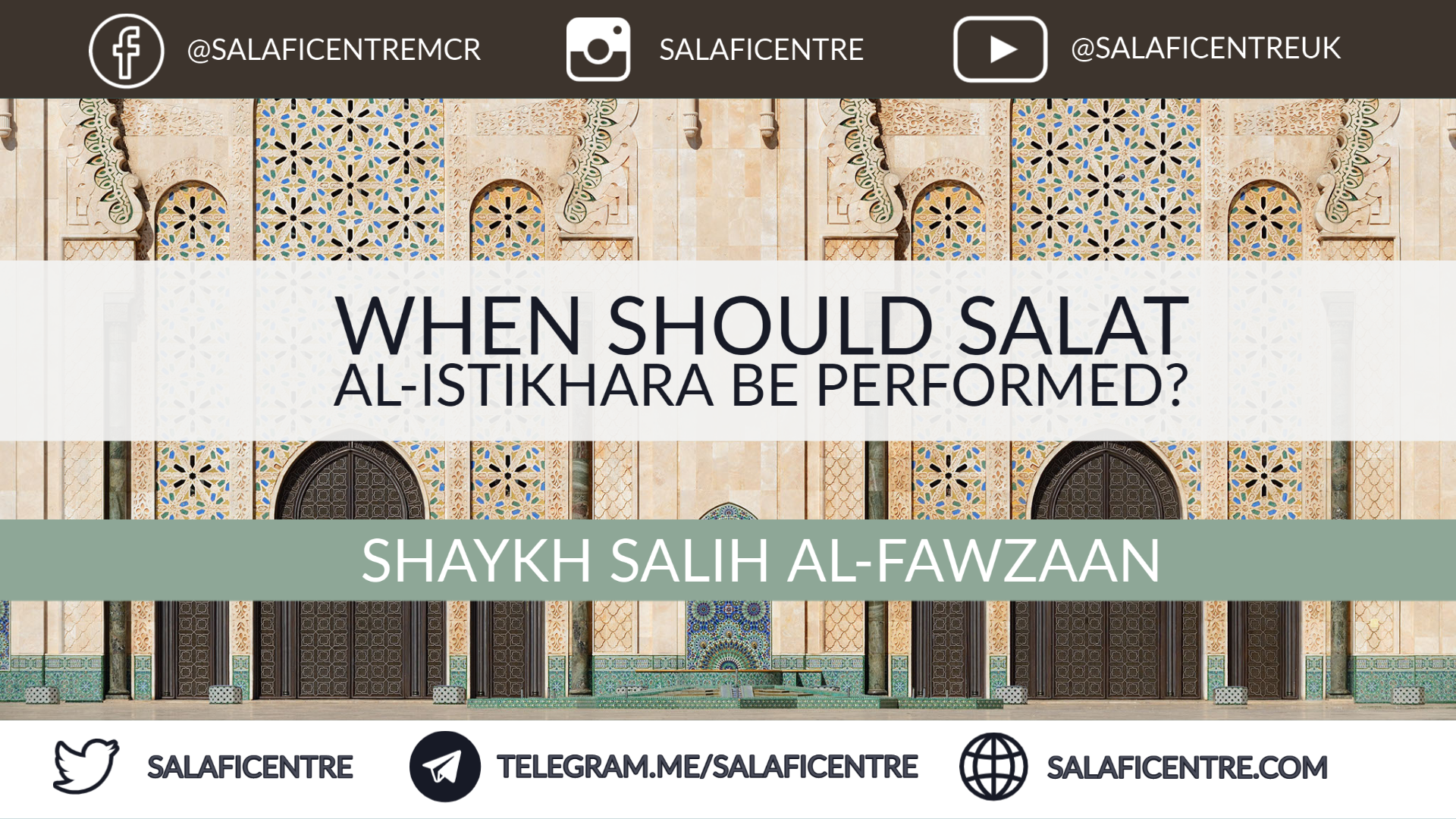 NEW VIDEO! When Should Salat Al-Istikhara be Performed? – Shaykh Fawzaan

Question: When should the supplication of Istikhara be performed? 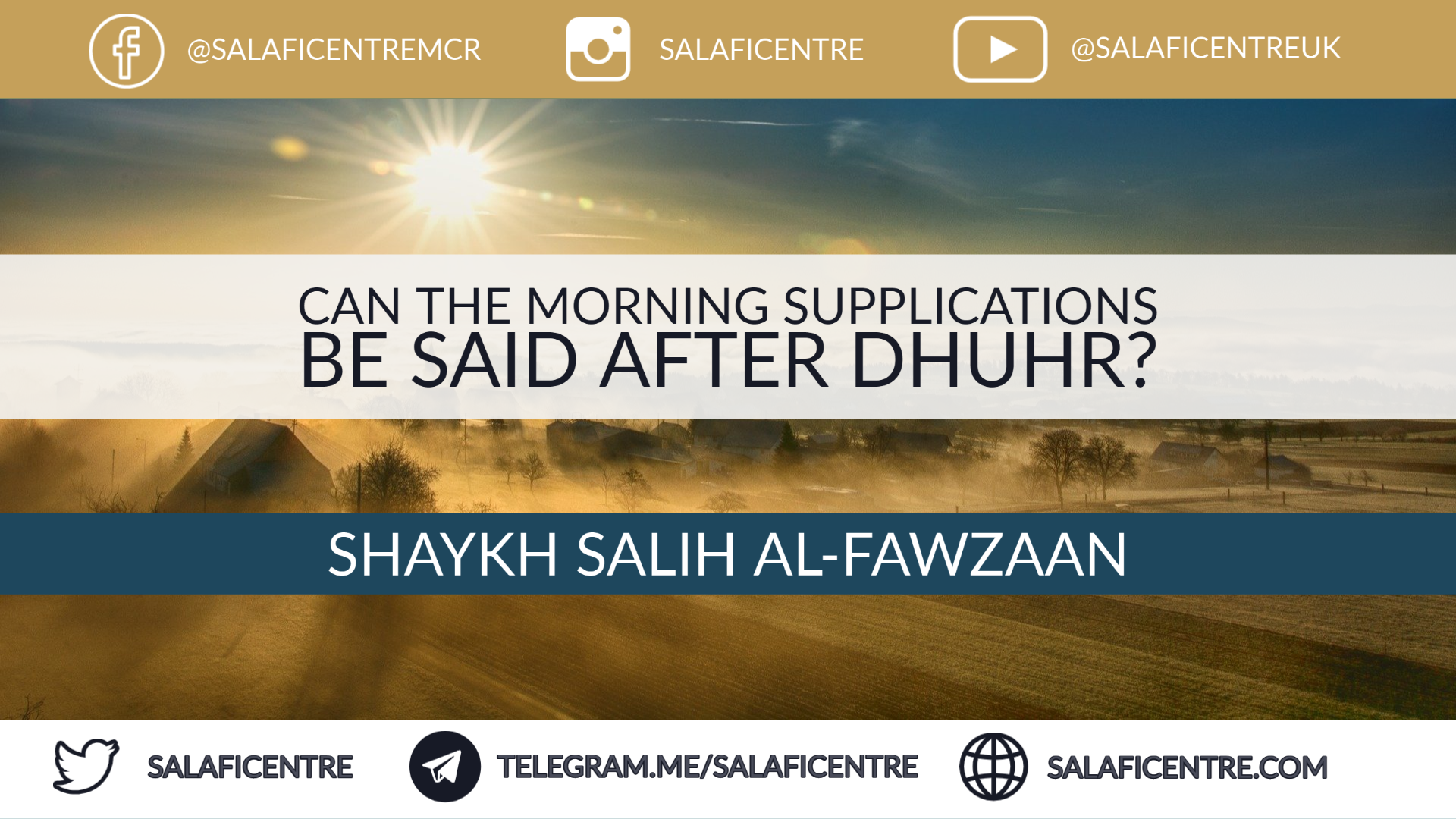 NEW VIDEO – Can the Morning Supplications be said after Dhuhr? – Shaykh Fawzaan

Written by The Salafi Centre of Manchester on October 21, 2021. Posted in Fatawa-Rulings, Purification of The Soul, Salaah - Prayer, Video, Worship - 'Ibaadah'.

Question: If the time of the morning adhkaar is missed, should they be said after dhuhr?

How to Remove Calamities – Shaykh Al-Fawzaan

If a person is put to trial and a calamity befalls him, what is the thing which will remove it from him? And how does a person turn to Allaah – The Mighty and Majestic – for protection, deliverance, help – whilst he is in this situation in which he is put to trial through these illnesses?

Secondly, if this calamity or affliction is due to a sin, then verily he repents to Allāh from this sin – from those sins which is the reason behind this punishment that came upon him. 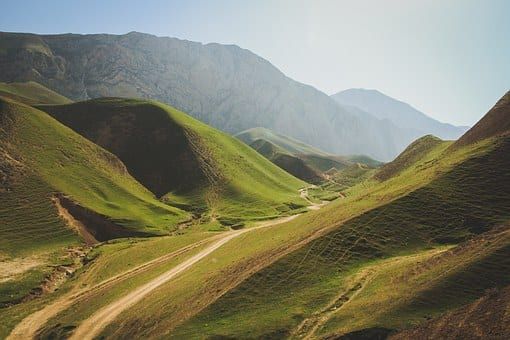 [1] Reminder And Reflection From Some of The Supplications of The Prophets: [Aadam (alayhis salaam)]

Written by The Salafi Centre of Manchester on February 18, 2020. Posted in Aqeedah (Creed & Belief), Articles, Morals and Manners - 'Akhlaaq', Pearls of Wisdom, Purification of The Soul, Worship - 'Ibaadah'.

Allaah [The Most High] said that Aadam and Hawwaa [alayhimas salaam] said: [رَبَّنَا ظَلَمۡنَآ أَنفُسَنَا وَإِن لَّمۡ تَغۡفِرۡ لَنَا وَتَرۡحَمۡنَا لَنَكُونَنَّ مِنَ ٱلۡخَـٰسِرِينَ – Our Lord! We have wronged ourselves. If You forgive us not, and bestow not upon us Your Mercy, we shall certainly be of the losers]- Meaning: Indeed, we committed the sin You forbade us from committing; we have harmed ourselves by committing the sin and have fallen into that which is a cause of loss unless you forgive us, wipe away the consequences of the sin and the punishment attached to it; grant us mercy by accepting our repentance and [free us from the calamity, harms etc] of the likes of these mistakes. So, Allaah forgave them just as Allaah stated:

Thus did Adam disobey his Lord, so he went astray. Then his Lord chose him, and turned to him with forgiveness, and gave him guidance. [Surah Tahaa. Aayaat 21-22]

Aadam attained success through five affairs: Acknowledgement of his sin, showed regret, blamed himself, hasten towards repentance and did not lose hope in Allaah’s Mercy. And Iblees was condemned to wretchedness through five affairs: He did not acknowledge his sin, he was not regretful, he did not blame himself, rather he blamed his Lord; he did not repent and he lost hope in Allaah’s Mercy. [Fiqhul Ad’iyah Wal adkaar vol 4/343-346] 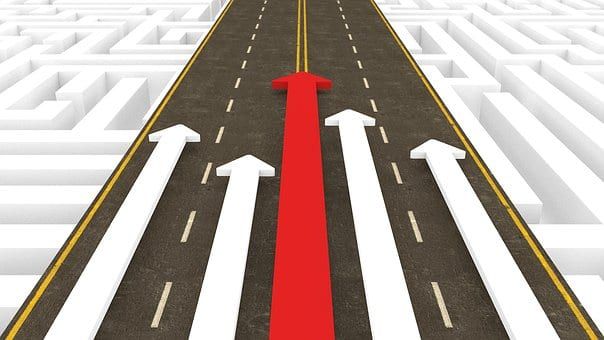 Is Supplicating for the Ruler Wrong? Shaykh Al-Fawzaan (hafidahullah)

Imam Ahmad said, “If we only had one supplication that was accepted, we would have supplicated for the ruler, because with his rectification lies the rectification of the Muslims.”

And indeed this sunnah has been abandoned to the extent that people find supplicating for the rulers strange and have bad thoughts regarding whoever does. 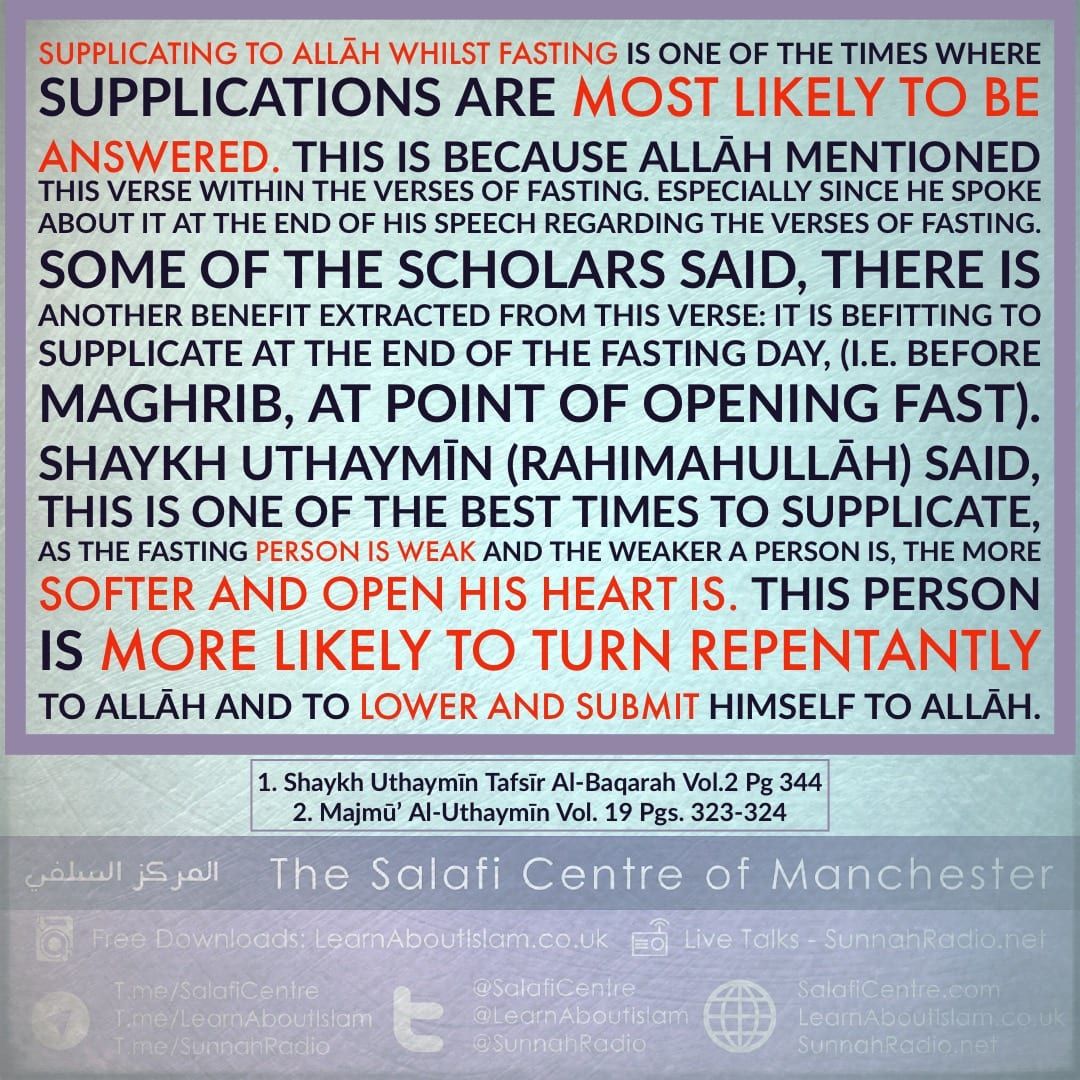 And when My slaves ask you (O Muhammad sallallāhu alaihi wa salam) concerning Me, then (answer them), I am indeed near (to them by My Knowledge). I respond to the invocations of the supplicant when he calls on Me (without any mediator or intercessor). So let them obey Me and believe in Me, so that they may be led aright. (Al-Baqarah: 186)

Benefits Extracted from this Verse for the Fasting Person:

Some of the scholars said, There is another benefit extracted from this verse: it is befitting to supplicate at the end of the fasting day, (i.e. before Maghrib, at point of opening fast).

This is one of the best times to supplicate, as the fasting person is weak and the weaker a person is, the more softer and open his heart is.  This person is more likely to turn repentantly to Allāh and to lower and submit himself to Allāh.