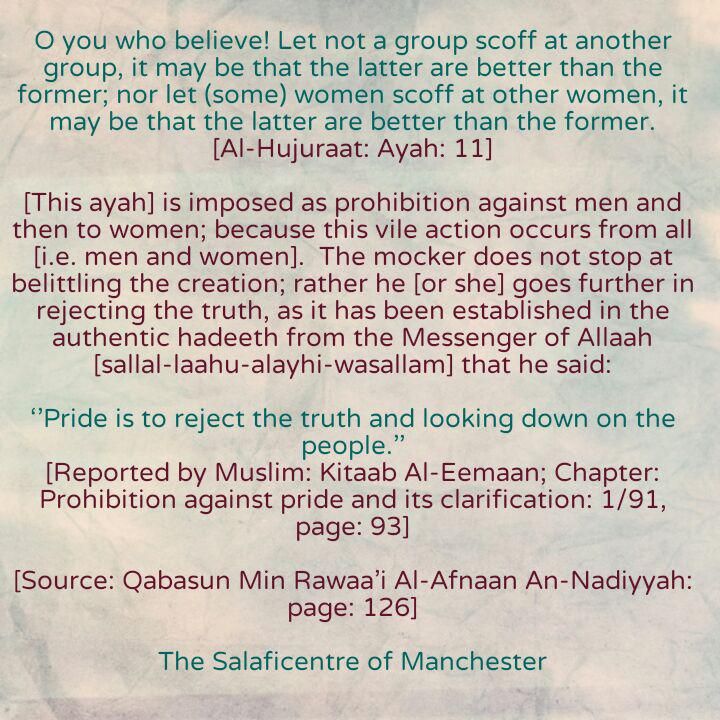 It is to belittle the people, making fun of them and encroaching upon their rights. Indeed Allaah has warned (us) against committing this crime that occurs from those who are conceited with themselves and look down on others.  Allaah (The Most High) said:

[This ayah] is imposed as prohibition against men and then to women; because this vile action occurs from all (i.e. men and women).  The mocker does not stop at belittling the creation; rather he goes further in rejecting the truth, as it has been established in the authentic hadeeth from the Messenger of Allaah (sallal-laahu-alayhi-wasallam) that he said:

‘’Pride is to reject the truth and looking down on the people.’’ [Reported by Muslim: Kitaab Al-Eemaan; Chapter: Prohibition against pride and its clarification: 1/91, page: 93]

If  Allaah bestows blessings upon a slave and he (the slave) wishes that it should continue and not cease, then it is obligatory upon him to be thankful to Allaah (The Mighty and Majestic) for it.  However if he falls short (i.e. the falling short that takes place by way of neglect) in this,  it (i.e. the blessing) is taken away and there comes about upon him humiliation and belittlement.  This is what Allaah—The Lord of Mankind, Jinn and all that exists– has decreed and He made it His way in dealing (with the creation) in His universe.  And there is no power or strength except with Allaah (The Exalted, The Tremendous One, The Magnificent]

When will Palestine be returned to us?  When we return to Allaah (in correct creed, righteous action, obedience etc.) Palestine will be returned to us.  Indeed, the Prophet (sallal-laahu-alayhi-wasallam) also informed us that humiliation will befall the Ummah and that belittlement will surround its children (i.e. the sons and daughters of this Ummah) when they oppose the religion of their Lord and are isolated from following the Sunnah of the Prophet of (this Ummah).   [He (sallal-laahu-alayhi-wasallam) said: ”If you deal with usury (eena), and you hold onto the cow’s tails and you are content with agriculture, and you leave off Jihaad in the path of Allaah, Allaah will permit your humiliation and he will not remove that state from you until you return back to your religion.”  [Reported by Imaam Abu Daawud (rahimahullaah) on the authority of Abdullaah Ibn Umar (radiyallaahu-anhumaa).  Hadeeth Number 3462.  Declared authentic by Imaam Albaanee (rahimahullaah) in As-Saheehah 11]

Indeed what takes place today in Gaza is not (merely) an affair of support (needed from) humans and it is not an affair solely connected to humans in its entirety.  It is not an affair (related to performing charitable good deeds, such as) what is entrusted to the people who display noble generosity—the people who spend freely, bestow gifts, show kindness and are open-handed.  The affair is not (merely) about (performing) good actions, rather it is an affair of creed and it is an affair related to creeds.  It is an affair related to creed in its origin and to the religion in its backbone.

It is not an affair stirred up by the disbelievers before the Muslims, for indeed the manifest emotionalism that has filled the whole world cannot benefit in anything.  It is not the sound means that will lead to what is sought after.  The unambiguous means (in achieving what is sought after) is neither hidden from one who has eyes nor from one who possesses insight.  That is because (this emotionalism) is neither from the legislated means of the Islamic legislation in achieving what is sought after nor is it that which the beloved Prophet (sallal-laahu-alayhi-wasallam) guided us to.

For a beneficial article on the conditions of Jihaad, see link:

When will Palestine be returned to us?

When a Muslim in any place in the earth asks, ”When will Palestine be returned to us?” The answer is, ”If you return to Allaah (in correct belief, righteous action, obedience etc.), Palestine will be returned to you.”  This answer is derived from the statement of the Messenger (sallal-laahu-alayhi-wasallam) reported by Imaam Ahmad and Abu Dawood on the authority of Thawbaan (radiyallaahu-anahu) that the Messenger (sallal-laahu-alayhi-wasallam) said: ”The nations will soon call one another against you, just as people call one another to eat from a qas-a (i.e. a large plate of food). They asked: ‘’O Messenger of Allaah, is it because we will be few in number at that time? He (sallal-laahu-alayhi-wasallam) replied: No, you will be many in number at that time, but you will be Ghuthaa –(i.e. like the froth scum on the water).  And Allaah will remove from the hearts of the enemies the fear they had for you and will place wahn in your hearts. They said: What is Wahn O Messenger of Allaah? He said: Love of the worldly life and having hatred for death.’’ [Reported by Ahmad 21897 and Abu Daawood 4297. [Declared authentic by  Imaam Albaanee in As-saheehah number: 8183]

If we return to Allaah (in correct belief, righteous actions, obedience etc.), He will returned to us what has been taken away away from us. If we remain distant from Allaah (i.e. distant from the correct creed, righteous actions, obedience etc.), we will lose what is in our hands. And indeed Allaah (The Blessed and Most High) has made this judgement in His Tremendous Book, and He (The Most High) said: [وَإِذْ تَأَذَّنَ رَبُّكُمْ لَئِن شَكَرْتُمْ لَأَزِيدَنَّكُمْ ۖ وَلَئِن كَفَرْتُمْ إِنَّ عَذَابِي لَشَدِيدٌ ] ”And (remember) when your Lord proclaimed: “If you give thanks (by accepting Faith and worshipping none but Allah), I will give you more (of My Blessings), but if you are thankless, verily! My Punishment is indeed severe.” [Soorah Ibraaheem: Ayah: 7]

He (The Blessed and Most High) clarified that being thankless for blessings bestowed (on us) will cause it to cease…. Our scholars say, ”Blessings are a prey and being thankful (for it) is the thing that makes (it) remain.

Written by The Salafi Centre of Manchester on November 18, 2012. Posted in Da'wah - Calling To Islam, Muharram and Ashoorah.

Fasting the day of Ashooraa is a Sunnah due to what has been established in the authentic narrations of the Prophet (صلى الله عليه وسلم) in indication to that.  And it (Ashooraa) was a day which the Jews fasted because it was the day in which Allah saved Moosaa (عليه السلام) and his people and destroyed Firawn and his people; so our Prophet Muhammad (صلى الله عليه وسلم) fasted it as (an act of) gratefulness to Allah.  He (sallal-laahu-alayhi-wasallam) authorized fasting (the day of ashooraa) and legislated for us to fast a day before or after it.  To fast the 9th along with the 10th is better, and if the 10th is fasted along with the 11th then that is sufficient to oppose the Jews.  And if you fast both of them (9th & 11th) alongside the 10th then there is no problem in that due to what has been transmitted in some reports, “Fast a day before it and a day after it”.  As for fasting Ashooraa by itself, then it is disliked.  And Allaah (alone) is the Guardian and Owner of all success.

Written by The Salafi Centre of Manchester on November 17, 2012. Posted in Family & Women, Fasting, Fatawa-Rulings, Muharram and Ashoorah.

Question:
A lady fasted the 9th of Muharram and began her menses the day of Ashooraa, is it obligatory upon her to make up (the fast of Ashooraa) or is an expiation binding upon her?

Islaam is built upon five: The testimony that none has the right to be worshipped except Allah and that Muhammad is the Messenger of Allah, the establishment of the prayer, the giving of the Zakaat, the fasting of Ramadhaan and Al Hajj to the House of Allah. (Bukhaari)

As for fast of Ashooraa it was obligatory in the first affair (i.e. beginning of Islam), then it was abrogated by the (obligatory) fasting of Ramadhaan and fasting it became voluntary—meaning: fasting Muharram whilst fasting the 10th (Ashooraa) is more emphasized than fasting the remaining days of Muharram.

And based on this we say in answer to the question of this lady:

Indeed she fasted the 9th and her intention was to fast the 10th day, however it became impossible for her because of menses, then indeed it is hoped that the reward for fasting the day of Ashoora will be written for her because she made the intention of fasting it, even if it was prevented.

And when a person intends a righteous action and hastens towards the means of obtaining it, however it became impossible for him, then his reward is written for him due to the statement of [Allaah- The Blessed the Most High]:

And whosoever leaves his home as an emigrant unto Allah and His Messenger, and death overtakes him, his reward is then surely incumbent upon Allah. Surah An-Nisaa Verse 100

Therefore, if a preventative legislated (Islamic ruling) occurred, there is no making up for it because it is a Sunnah and it’s time has elapsed.

The position of the youth towards Islaam

Written by The Salafi Centre of Manchester on November 13, 2012. Posted in Da'wah - Calling To Islam, Methodology - 'Manhaj', Qur'aan, The Salaf - Pious Predecessors.

Question: ”What should be the position of the youth towards Islaam? And with what do you advise the youth in this critical time of their lives?” ;

Answer: ”It is obligatory upon every Muslim to hold tightly to the rope of Allah and that he adheres to His book the Most High and the Sunnah of his Prophet (صلى الله عليه وسلم) and that he calls to the path of Allah, whilst not being fanatical to his opinion when what is correct is in other than (his opinion); rather he follows the truth wherever it is, for indeed the truth has more right to be followed, whilst totally taking the prophet (صلى الله عليه وسلم) as an example in his actions, good manners and character and in his call (dawah), due to His statement [I.e the statement of Allaah (The Most High):

Who is the successful one?

Written by The Salafi Centre of Manchester on November 13, 2012. Posted in Da'wah - Calling To Islam, Methodology - 'Manhaj', Qur'aan.

Question: ”Who is the successful one in the sight of Allah?”

“When The Eyes Fail to Shed Tears…” Imaam Ibnul Qayyim

Written by The Salafi Centre of Manchester on November 4, 2012. Posted in Da'wah - Calling To Islam, Morals and Manners - 'Akhlaaq', Pearls of Wisdom, Worship - 'Ibaadah'.

”When the eyes fail to shed tears out of fear of Allaah, then know that its dryness is due to hardness of the heart.”

”We do not have time to defend ourselves; but we (defend) the Sunnah.  And even if we are tormented with fierce battle we will not leave anyone who speaks against the Sunnah of the Messenger (Sallal-laahu-alayhi- wa-alaa-aalihi-wasallam) — be he a Shia, or a Soofee or from Ikhwaan al-Muslimeen (i.e. the deviated and destructive innovated Muslim brotherhood of Egypt and else- where); because we are to sacrifice (ourselves) for the Sunnah and our objective is the Sunnah.”